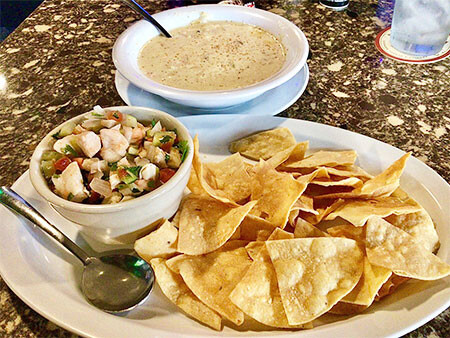 The last time I ventured into Lobo Del Mar on South Padre Island, I ended up remembering an old comment my dad would make to me – don't let your eyes get bigger than your stomach. Of course, with their Caveman Burger, it's hard not to keep your eyes off of it. It's amazing – both in taste and size.

Unfortunately, I remembered that statement after ordering a lunch fit for a king – and his family. But it was so good.

This time I turned down the quantity a bit and started with the small order of ceviche and a bowl of seafood chowder.

On this day, which started kind of cool, but was in the low-60s when I arrived, that chowder hit the spot. Each spoonful was loaded with shrimp or other goodies, the temperature was great, and the consistency was spot on, and that's key – you don't want your chowder thick like pudding, or watery. 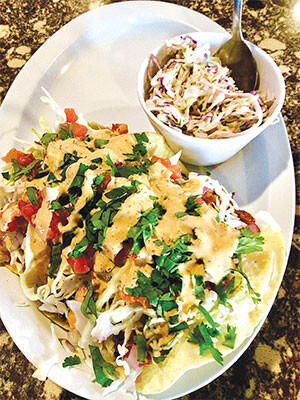 After enjoying the ceviche, which I enjoy here more than just about anywhere because of its freshness, and because of how much they cram into the cup, I kept it in the seafood world and ordered blackened shrimp tacos. One can order shrimp or fish tacos one of three ways – blackened, fried, or grilled – and they come on a grilled corn tortilla stuffed with shredded cabbage, onions and diced tomatoes. Then it's topped with a creamy remoulade and mama's “Wolf Fire” salsa.

As I waited for it, I talked with the waitress, who explained to me about the daily entertainment, including the belly dancers on Wednesday nights during a usually packed house. In my few minutes there I saw a group of tourists, talked to some locals from McAllen and found some Iowa Winter Texans.

When the main course arrived, the first thing I realized is that this was gonna be a messy meal – just how I like it. But it was tantalizingly good. The veggies and the sauce mixed in well with the generous portion of blackened shrimp. The tortillas couldn't hold in all the yumminess (if that's a word).

This was my third visit to Lobo Del Mar, the other two were on the dock overlooking the Laguna Madre. Despite that area not being open while I was there, it was still extremely pleasant inside. And, while my eyes weren't bigger than my stomach, I'm guessing part of that reason is that my stomach has grown eating at delicious places like this.