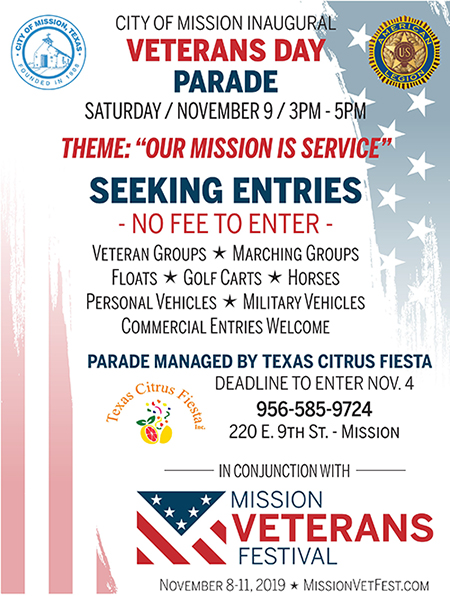 Each year, thousands of people unite to commemorate Veterans Day, a holiday that honors all those who have served the country in war or peace — dead or alive — although it is largely intended to thank living veterans for their sacrifices. This year, the City of Mission is honoring local military heroes with its weekend-long Mission Veterans Festival, “Our Mission is Service,” beginning Friday, November 8, with a flag-laying ceremony at the RGV State Veterans Ceremony, 2520 Inspiration Rd, in Mission.

“Veterans Day is not just a chance to enjoy an extra day off from work or school. We want to make sure our community recognizes its true purpose,” Mayor Dr. Armando O’Caña said. “We must acknowledge the men and women who have served in our armed forces and we’re hoping that some World War II and Korean War veterans join us. We need our citizens to come out and wear their red, white and blue, bring the family and honor our heroes with this exciting new event.”

On Saturday, November 9, the full-day celebration kicks off with the Saluting Our Veterans Cook-Off from 9 a.m. to 6 p.m. at the CEED Building, Bryan Rd. and Bus. 83. There will be live music, food vendors and more. A fair with vendors will also take place at the City of Mission Parks and Recreation building next door to the CEED Building, from 5 to 8 p.m.

The day will continue with the Mission Veterans Day Parade at 3 p.m. The procession will begin at Leo Peña Placita Park, runs east on Business-83 to Bryan Road and end at the CEED building.

The festive parade will showcase floats, RGV veterans, military vehicles, festooned golf carts and local marching bands. A military flyover is also scheduled for the parade. The procession is expected to wrap up by 5 p.m.

Community members can then take part in the Mission Veterans Day Festival from 5 p.m. until midnight outside the CEED building in conjunction with the 5x5 Brewing Company. There will be plenty of family-friendly entertainment including live local music performances. Taste-tempting delights will be available for purchase from several food trucks and food vendors. Military vehicles are being sought for display at the festival. In addition, veterans’ organizations will be on hand to promote military services and government resources available to veterans.

“We will also be having a chili cook-off at 5x5 on Sunday between five veteran teams to include the army, marine corps, navy, air force and the coast guard,” Sean Downey, Brand Manager of the 5x5 Brewing Company said. “The winner will be decided by the people’s choice so it should be a good showdown.”

The Chili Cook-Off will take place from 1 to 7 p.m. on Sunday, November 10 at 5x5 Brewing. The cook-off will be between five veteran teams competing for bragging right on the best chili in the US military. Teams competing will be from the Army, Marines, Navy, Air Force and Coast Guard.

A Cars and Stripes Car Show will also take place on Sunday from 2 to 5:30 p.m. Setup will start at 12 p.m. Rewards will be given at 6 p.m. for best overall, best Veteran entry, best car, best truck and best motorcycle. Sunday events will benefit Sand Devils MC and American Legion.

The celebration recognizing military men and women will continue Monday, November 11 at 8 a.m. with a golf tournament at Shary Municipal Golf Course. The tournament be free for all veterans. Ready Tee Golf has teamed up with the City of Mission for the first-of-its-kind Veterans Day Golf Tournament. The “Fairway to Freedom” is a 3-man Florida scramble. It will be a fun filled day with food, beverages, door prizes and comrades.

“We want this weekend to lead into Veterans Day and for our men and women in uniform, past, present, and future, to know that we cannot thank them enough,” Mayor O’Caña said.

Full information can be found online at missionvetfest.com.