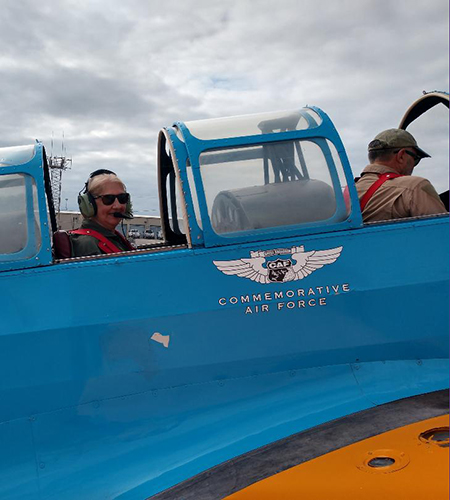 Two passengers on the two-plane flight were Lynn Clasen and Marjorie Jacobs. The two women had participated in a fund raising drawing the previous evening. The prize was a flight over South Padre Island during Blasing’s Veterans Day Celebration.

The Rio Grande Valley Wing of the Commemorative Air Force (RGV Wing CAF) is based at the Port Isabel Cameron County Airport. The RGV Wing is one of 84 units, nationwide, of the Commemorative Air Force whose membership numbers over 11,000. The RGV Wing has seven aircraft in the hangar and has organized a walk-in museum featuring World War Two artifacts and memorabilia.

Tentative hours of operation are Saturdays, 9 a.m. to 1 p.m. Guided tours for groups of five or more are welcome by appointment anytime by calling David Christopher at (970) 397-4604.

Weather permitting, and crew availability, one of the Museum’s planes will be flown during the tour. Plane rides are available for a $250 donation. CAF are a 501c3, not for profit organization.