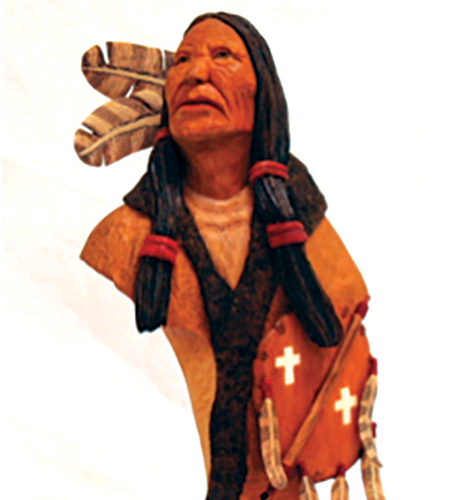 Hundreds of exhibits in 27 categories of carving will be available for viewing after judging is completed. Categories of carvings include animals, birds, flowers, mythical creatures, jewelry, carousel animals, knife carvings, wooden toys, spoons, gourds, bowls, and wood burning. Most categories also include subcategories like types of birds. Both members and non-members may enter the competition.

The show features exhibits by carvers, carving instructors, demonstrations, tool vendors, and wood vendors. Door prizes will be given away every 30 minutes with three large door prizes given at the end of the show. Table space may be rented by both commercial and non-commercial exhibitors.

Entries will be judged by Debbe Edwards and Rich Wetherbee.

Edwards is a Native American Indian sculptor from Northeast Oklahoma. She is a member of the Cherokee Nation. She started her carving in wood in 1990 after receiving a small set of tools as a Christmas present. She became instantly hooked, started attending woodcarving shows and entering her pieces into competitions. Edwards has won many Best of Show and Judges Choice Awards with her animal sculptures.

In 1994 she began teaching seminar classes and has taught classes throughout the United State and Canada. She began sculpting in stone in 1998 and produced bronzes of some of her original wood sculptures.

Her art represents her life of working with animals. Much attention is given to detail, character and mood in each piece - creating very life-like animal sculptures.

Wetherbee began carving around 1982. His father, an excellent carver himself, let Wetherbee carry a jackknife and taught him the basics of grain direction and stop cuts. He can remember getting acquainted with the National Wood Carvers Museum in Monument, Colorado in the mid 70’s, making him get hooked on woodcarving.

Wetherbee began doing art shows, displaying and selling his work throughout the United States in the early 80’s. He began his own studio in the mid 80’s. In his studio he reproduces his pieces in molds to sell.

He is a member of the Caricature Carvers of America, which he and a group of guys formed to promote the art of caricature carving. He teaches woodcarving and design throughout the United States.

A Milton Smith Memorial Award will be awarded to the winning bird, selected by Linda Smith, from any bird entered in the competition.

Milton Smith, who passed away in 2015, was dedicated to carving and was known for his willingness to help in any way. This made him a friend to anyone he met, and he was cherished friend to many. Milton was also known for his imagination and his wood carving skills and being a willing teacher. Milton and Linda worked behind The Tool Box counter in recent years.

Linda will sponsor the Milton Smith Memorial Bird Carving Merit Award. The award will be a commemorative knife, engraved and dated.

Awards given will also include Best of Division, Best of Show, and People’s Choice.

Rally on the Rio

The rally is an opportunity for woodcarvers of all skill levels, and those wanting to learn, to participate in carving, pyrography and painting classes. Classes vary in length from one to six days, according to the complexity of the project. Classes begin at 8 a.m. and end for the day at 4:30 p.m.

George and Charlotte Vaughn, of the Tool Box, will have a large supply of carving supplies available at reasonable prices. George will also sharpen tools for the carvers.

The Rio Grande Valley Woodcarvers, founded in 1983, meet weekly at 8 a.m. on Thursday mornings, October through March, at the Nomad Shrine Club. Carvers of any skill level are always welcome. Visitors are always welcome to look over a shoulder and ask questions.