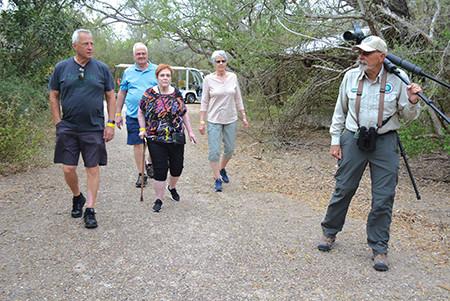 An easy way to view attractions at Estero Llano Grande State Park is to climb aboard a tram and enjoy a two-hour trip narrated by a park interpreter.

For the March 4 tram trip, eight Winter Texans from Siesta Retirement Village, just down the road from the state park, learned a lot from volunteer guides Tom and Connie Unsicker. They noted that the 280-acre Estero Llano Grande on Weslaco’s south side, is among the youngest and smallest by state park standards. But the park features some of the most diverse habitat in the Valley with its different vegetation areas, animal and bird life.

The former farmland reflects a major example of habitat restoration that was pieced together in the early 2000s from a variety of land parcels and opened in 2006. 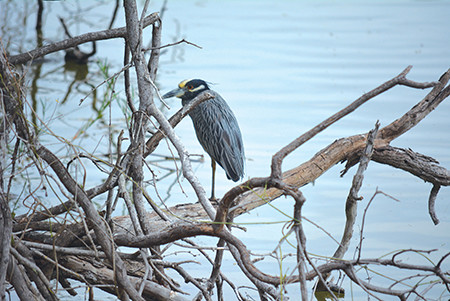 Visitors Jerry and Gail Runnels, who brought along a sister, Kathy Schlice, and husband John, all from central Wisconsin, found the interpreters to be “very informative.” Jerry, who like the others, was on his first visit, was surprised to learn that many residents don’t know about the state park and its attractions. He was surprised to see how quickly growth reappears in less than a decade.

While the Runnels have been at the Weslaco area resort for three seasons, this was a first visit for the Schlices to the Valley. The couple said they were enjoying their short stay and were in Mexico the previous day. Kathy indicated she has found fun people. John thought the state park’s pack rats to be quite interesting.

John and Judy Beggs, from the same Wisconsin area, have been coming to the Valley for 19 years, but this was their first visit to Estero Llano Grande. They like the friendliness of the “Valley.”

Rounding out the visitors was Gean and Kris Jameson, from Minnesota. The Jamesons were in their second winter here.

The first stop on the tour by the Unsickers, who live at the state park and like to show off their “backyard,” involved a sandpaper tree, which have been used by some for filing fingernails, according to the guides. Its orange and red berries serve as feed for the birds.

In speaking of birds, Tom related that South Texas has 30 species not found anywhere else in the U.S.

Because of this, Connie said, “I get to meet people from all over the world.” 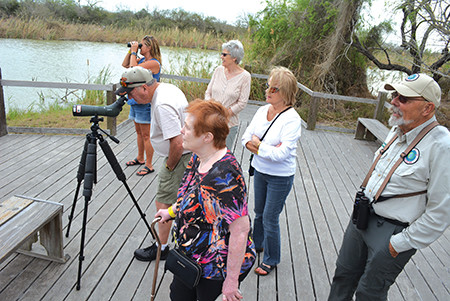 Birders want to record these sightings, with several of the birds seen during the tour, such as a hooked bill kite. Tom said it has just returned to the park after its feed supply of tree snails was wiped out in the 2010 Rio Grande River flood.

The park is also home to part of the World Birding Centers network. With the Texas Parks and Wildlife Agency agreeing to be part of the centers, land acquisition was provided. The City of Weslaco offered the Lakeview Trailer Park where volunteers can stay while working at the park.

A second stop on the tour was to see some honey mesquite trees, which can be tapped for sap and seed can be milled into flour. Tom noted the flour can be found in some grocery stores. Nearby were some milkweed plants, with 15 different species found in the park, attracting many types of butterflies. The visitors learned about the two sable trees in the park, which can grow to a height of 80 feet. One species of palm trees is also present, which has leaves that fold inward and do not have jagged edges.

The dense brush at the site is like the Tamaulipas thorn forest found on both sides of the border 200 years ago, according to Tom. Several types of cactus, but especially the prickly pear variety serve as a food source for many animals, starting with the pack rats, who eat from the top down. Javelina and cattle concentrate on the middle portion, with possums, raccoons and rabbits eating around the base. The velvet cactus is home for a cochineal beetle, whose larvae when crushed yields a brilliant red dye, once a very valuable commodity. His wife noted that a large Texas tortoise can sometimes be seen ambling along the trail.

A delta area was toured atop a levee, which protected the park in that 2010 flood. Then there was what Tom called the tropic area, which has plants and trees from all over the world that had been encouraged by the former landowner. The tram was later parked beneath one of two huge banyan trees in the park. 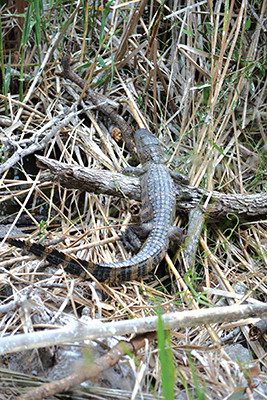 Surprisingly, there are six totem poles in the RV area, which are being kept because woodpeckers have made holes for themselves and other nesting creatures.

Of great interest was Alligator Lake, where two young gators, approximately three years of age were seen basking on the shore under cloudy skies, along with a diamond back water snake. Gators grow a foot a year until reaching maturity. While not seen, the lake is also home to a 12-foot long male gator and a 10-foot female, plus a number of 4 and 5 footers.

At a butterfly feeding station, the visitors were told a combination of banana, brown sugar and beer placed on logs or branches will attract the fliers. That is in addition to the plants butterflies like.

Connie called the park, “an oasis in an urban area.” She said, all fifth graders in the Donna and Mercedes school districts had visited the park this last year.

Those interested in taking a tram tour can call and make a reservation at (956) 565-3919. The tours take place at 2 p.m. on Wednesdays and Sundays. But, it’s possible to arrange a tour at other times for a group of six or more in number. The tram also makes it possible for handicapped individuals to see the park.

Other park activities include birds walks at 8:30 a.m. Wednesdays and Saturdays, plant walk at 1:30 p.m. Thursdays and butterfly walk at 1:30 p.m. Fridays. There’s also a birding basics offering at 1:30 p.m. Saturdays. To learn about other activities like a night hike on March 21 or outdoor cooking with a ranger on March 14, call the park office. Camp Thicket is also available for group retreats.