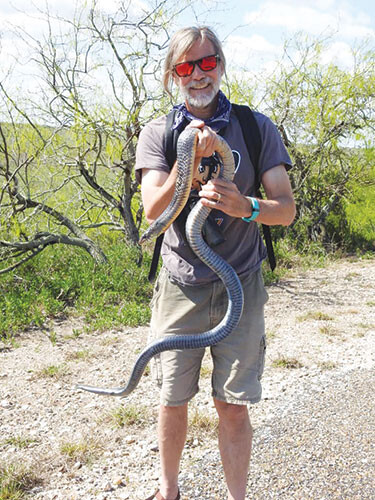 Dive deeper into the fish ecology of South Texas. Fish play an important role in recycling nutrients back into their environment and are essential for the survival and overall health of aquatic ecosystems. Join us March 24th at 6 p.m. for a special presentation focusing on “A century of change to the fish assemblages and flow regime in the Rio Grande/Rio Bravo with Dr. Chris Taylor.

For the Rio Grande Valley our main water source is the Rio Grande River (known as the Rio Bravo in Mexico). The Rio Grande flows for about 1,900 miles starting at the San Juan Mountains of Colorado and is fed by a series of tributaries (river or stream flowing into a larger river or lake): Pecos River in West Texas and the Rio Conchos, Rio Salado, and Rio San Juan in Mexico. The river we know today is not the same that it was hundreds of years ago. Due to changing climates, erosion/deposition, and human impact the Rio Grande has undergone a significant amount of change. These changes have a major effect on the communities that surround the rivers and on the diversity of species that inhabit the water. In his presentation, Dr. Taylor will discuss the changes in flow regime and how they have affected the diversity and population of fish found the Rio Grande River.

Dr. Christopher Taylor is a fish ecologist and ichthyologist who has been researching fish ecology in rivers and streams of Texas and the southeastern U.S. for over 30 years. He obtained his Ph.D. at the University of Oklahoma in 1995 where he completed a dissertation titled, Factors affecting the distribution of stream fishes at multiple spatial scales. Dr. Taylor took his first academic position in the Department of Biological Sciences at Mississippi State University where he spent 12 years and moved up the ranks to full Professor. He then moved to Texas in 2007 and spent five years in the Department of Natural Resources Management at Texas Tech University in Lubbock. Anxious for something different, Dr. Taylor moved to Washington (state) as the Program Head for the fish physiology laboratory at the Abernathy Fish Technology Center, which is part of the research arm of the U.S. Fish and Wildlife Service. An opportunity arose to return to academia with the founding of the University of Texas Rio Grande Valley, where he remains today and continues working on the ecology of fishes in Texas rivers.

Learn more at the Nature Speaker Series at Quinta Mazatlán for a special presentation on “A century of change to the fish assemblages and flow regime in the Rio Grande/Rio Bravo” this Thursday March 24th at 6 p.m. Tickets are $5 per person. Pre-purchased tickets recommended. Tickets available for purchase at www.quintamazatlan.ticketleap.com