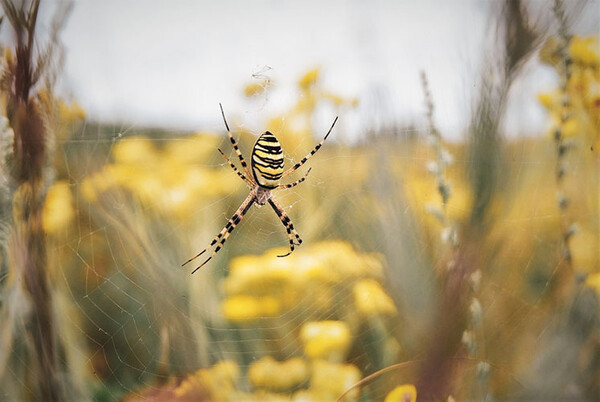 Garden spiders may look scary, but they are a friend of gardeners and help keep insect populations in check around the house.

Brown said garden spiders are orb weavers, which are known for their intricate circular, grid-like webs. They build webs because they have poor sight and utilize the webs to capture their prey. Insects are caught in the web, and vibrations from their struggle signal the capture. The spider then wraps up the insect to eat at its convenience.

“I think most people would associate Charlotte’s Web with orb weavers and garden spiders,” she said. “They may look scary, but they are a very beneficial spider.”

Get to know yellow garden spiders

Garden spiders live about one year, Brown said. They range in size and color but are typically black or brown with yellow and shiny silvery or white markings and large, spindly black or brown legs. Females have much showier markings than males.

Male spiders’ bodies are much smaller, about a quarter inch to half inch compared to females that reach three-quarter of an inch to 1.25 inches. They emerge from teardrop-shaped egg sacks each spring as spiderlings. The tiny spiders disperse by ballooning or throwing a strand of silk into the air to catch the wind to other locations.

Spiderlings feed on small insects and molt as they grow. By summer, males search for females, build a web nearby and begin trying to mate without being eaten.

Once they mate, females construct an egg sack and lay around 500-1,500 eggs inside it. Females can produce multiple egg sacks depending on mating success. Eggs typically hatch out in late summer or fall, and spiderlings overwinter inside the sack.

“They manage landscape and garden pests, but food is food,” she said. “They are on the whole beneficial because they reduce insect populations.”

Garden spiders pose no danger to humans, Brown said, but they can be annoying if they build webs in high traffic areas. In those cases, they can be relocated to out-of-the-way locations.

Brown said people can gently grab the spider for relocation but should wear gloves because they do have fangs and may perceive being handled as danger. People not comfortable with spiders can use a broom to clear the web away and continue to clear the rebuilt webbing so that the spider eventually moves on.

The spiders typically stay in and around vegetation during the day to avoid predators, Brown said, and will scamper away or drop from their web to escape and hide when disturbed.

Bites could result in localized pain, redness and possibly itchiness, so Brown recommends cleaning the wound well and taking Benadryl if there is swelling and itchiness. Scratching the bite could lead to a secondary infection if the wound is not maintained well.

“Garden spiders will not come after you,” she said. “They want to get away from most anything larger than they are. They’re beautiful spiders and a great benefit around the house.”