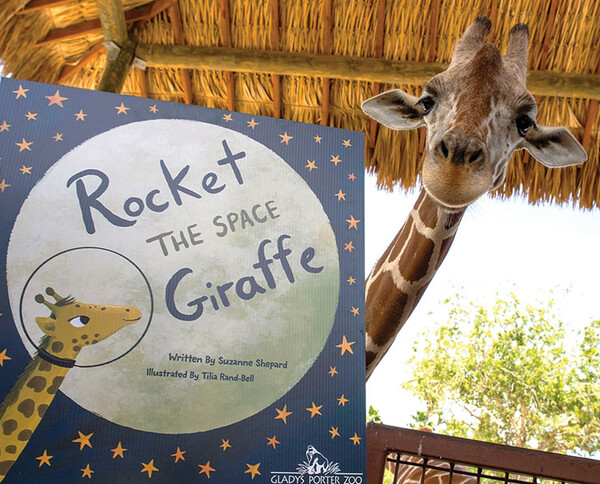 Rocket, a beloved giraffe at the Gladys Porter Zoo, is now the main character of her own children’s book, Rocket the Space Giraffe. The book was written by Suzanne Shepard, Board President of the Valley Zoological Society, and illustrated by Tilia Rand-Bell, an award-winning illustrator. Since the Zoo’s public unveiling of the book on July 21st, Rocket the Space Giraffe has skyrocketed to the #1 spot in New Releases of Children’s Zoo Books on Amazon.

In the book, Rocket as “Rocket the Space Giraffe” explores the moon and stars in her rocket ship with her best friend Cosmo, a Madagascan ring-tailed lemur. Along the way, they have fun and learn that dreams really can come true.

Rocket, the real giraffe, was named by Mary Muratore, who won the honor of naming her at Zoofari 2018, the Zoo’s annual fundraiser. Rocket made her public debut in January 2019 and has since captured the hearts of many Gladys Porter Zoo visitors. She is always first in line at the Giraffe Landing Feeding Station and loves interacting with the public, especially if there are treats involved. Rocket’s curious and outgoing personality makes her easy to love, and that’s precisely what gave Shepard the inspiration for the book.

“Rocket is such a friendly and amazing giraffe who really touched my heart. I hope that, in addition to enjoying the book, everyone can come out to the Gladys Porter Zoo and meet her,” said Shepard.

All proceeds from book sales will go directly back to the Gladys Porter Zoo for the care and feeding of Rocket and the animals at the Zoo. The book is available for purchase on Amazon and in the Zoo’s gift shops.