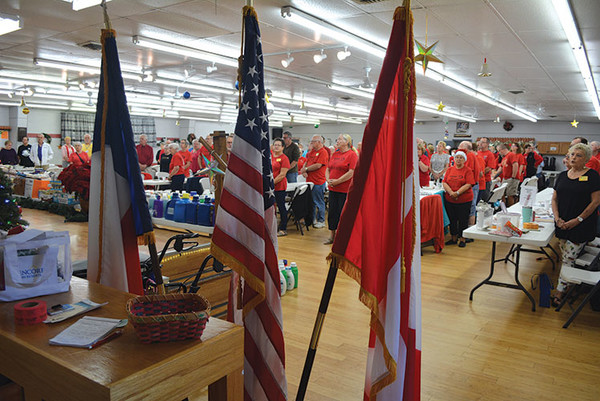 In a first-time effort, Paradise Park RV Resort residents built a small mountain of food, school supplies, candy and personal hygiene items, which were placed on display in the clubhouse during the regular Friday lunch time social gathering on December 20.

Sharon Bargel, who came up with the idea after watching something similar on Facebook, said the donated items are going to two ministries, Fishes and Loaves in Harlingen and Sow the Word that operates primarily in Nuevo Progreso, Mexico.

Loaves and Fishes, which is headed by Bill Reagan, is to receive canned and dry goods foods, lots of pasta, along with bar soap, shampoo and other hygiene articles. Dr. Bill Harrison, who directs Sow the Word, operates a program for feeding children in Progreso, which received the large commercial size cans of food, school supplies, coloring books, crayons and candy along with a lot of beans and rice.

Bargel said she originally took the idea to park management and after it was presented, residents strongly embraced the proposal. She promoted the donations as “a way to give back to the community.”

Stacey Flores, who has been Encore Corporation’s park manager for just two months, was happy to approve the project. Flores quickly learned how residents are into helping the community.

“They are big advocates for helping others.” she said.

Bargel asked park chaplain Jeff Hastings and his wife, Criss, to help with the new program. Jeff contacted the two ministries and the project got underway under the theme “Reverse Advent Calendar.” Each day during advent, park residents were asked to contribute a different item, starting with a spiral notebook on December 1, can of veggies the next day, followed by a can of fruit, bar of soap, small bag of candy, noodles, rice and etc. with the 20th being a bottle of laundry detergent. 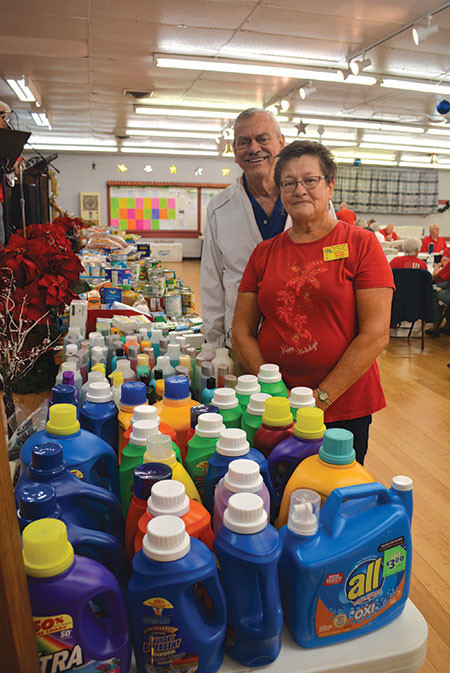 Because the word got outside Paradise Park, Sue Kaneski, who lives in Weslaco’s Ranchero Village, showed up on distribution day with about 30 dresses, sizes three to five, and another 20 shorts and tops for the boys and girls in Progreso. She brought them down to the “Valley” this fall, made by a band of sewers from the American Lutheran Church in Long Prairie, Minnesota.

They began providing the clothing, initially all made from pillowcases, about seven years ago for Sow the Word and since have added a few more ministries. Kaneski’s job has been to take care of the distribution, which this time also included school supplies and food items. Kaneski said, even her husband Dennis is involved in helping prepare packages in addition to financially supporting the effort.

The park’s lunch time was turned into a time of celebration for what had been done. Before the start of the burger and chicken meal, a patriotic mixture of carols and other Christmas songs were played by jammers Bill Java, Rick Jennings, Tom Holmes and Jim Becker.

Most of those attending wore red as a remembrance of the deployed U.S. Military troops. A number of residents sported red “Warrior 180 Foundation” shirts to mark the counseling provided by park chaplain Hastings to veterans suffering from PTSD.

Next up on the clubhouse stage was Bargel, who told the crowd how pleased she was with the response. She turned quickly to introduce the ministry directors to hear their comments.
Dr. Harrison, who travels across the border from Mission several days a week, oversees a program providing meals six days a week in Progreso for children 13 years and younger. On Sunday’s food is available only at church, which is intended to bring in people to hear a message.

The ministry began six years ago when he and his wife started paying for lunches at the taco carts in Progreso and giving away tennis shoes. He said that when it became apparent the tennis shoes were being sold by recipients and the money used to buy food, the program became one of just providing meals. And the Lord, he said, impressed upon the couple it was to be full time effort.

But, after the numbers started to grow along with the meal expenses, Dr. Harrison said they decided to acquire a trailer about four and half years ago to cook meals for the children. He told the park audience on Friday, he wasn’t sure how to pay for it, but the day the bill was due, a $10,000 check arrived that paid for it in full.

Sow the Word now has access to a couple of sheds near the trailer site behind a pharmacy in Progreso along with a small eight by 18-foot building where the three local women the ministry hired do all the cooking. They churn out about 1,000 meals a week for children. 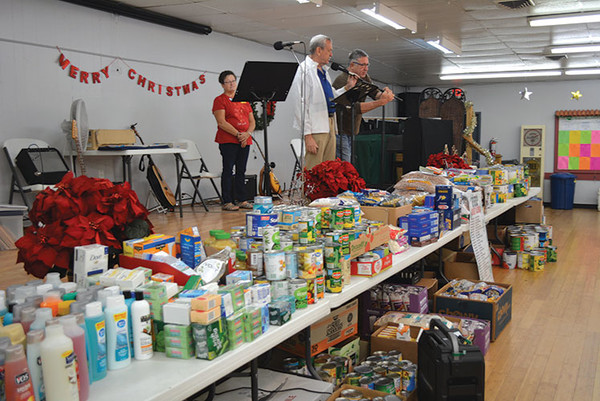 Dr. Harrison noted the ministry expanded to providing school supplies and offering meals to pregnant women and nursing mothers. The latter is thought of as still feeding kids, only babies in these instances.

Loaves and Fishes has been around in Harlingen since 1991, with the last 10 years under the directorship of Reagan. He told the audience that the initial effort was to help the homeless and later expanding it to those in the community, both in Harlingen and now also in Raymondville, in need of a hand.

Reagan outlined the ministry starting with the Bread of Life dining hall, where some 350 meals a day are served, adding up to 12,000 meals a month. The Open Arms Homeless Shelter is a second effort. There is also New Hope Job Shop, Family Emergency Assistance and Great Physician Healthy Living with a full-time nurse and two mental health counselors.
Both ministry directors indicated surprise at the amount of food and other supplies and thanked those present for their generosity.

The last to speak was the park’s advisory board president, Terry Wenk, who added his thanks to residents for their participation in Reverse Advent Calendar.

“No park, do I know of, to have given this much to the people of South Texas,” he concluded.