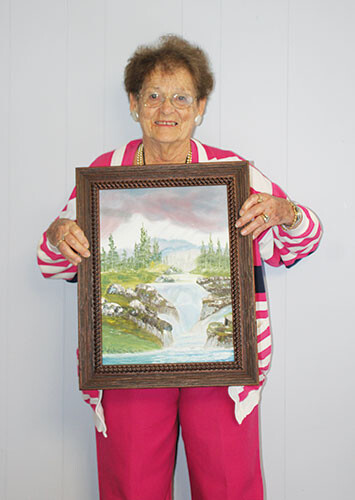 At 92-years-young, Ella Mae Marrs, who has been wintering in the Valley for over 30 years, had an exciting tale to share this season with her Winter Texan friends. A painting she did in 1992 came back in her possession this past summer.

Marrs said she took some art classes back in Kansas and had done the painting during that time. An article was written in the Kiowa County Signal in July, detailing how the painting was purchased at a Goodwill store in Mississippi before making it back to Marrs.

Marrs said she had a habit of taking pictures of all of her paintings, but for some reason, she did not get a picture of this one. So, the reunion was even more special, and that now she has it on her wall to cherish once again after all these years.

A lady by the name of Kim Cochran had purchased it at the Goodwill store in September of 2020. According to the article, Cochran said she liked researching the paintings she buys. This painting had a note on the back with Marrs’s name, date, and where she lived at the time. It took several months to track her down, but with the help of Google, she was able to find her name on a post on Facebook

Cochran was then able to locate her at a senior center Marrs and her husband were staying at.

The two were overjoyed, said the article, when they were finally able to connect and share the painting and stories of how it came to be, and ponder how it came to end up at a Goodwill store

Marrs said she has enjoyed her hobbies over the years and being involved in activities up north and in her park at Split Rail RV Park. Painting was just one of those things she picked up along the way…. At 60, she added

As a long time Winter Texan, she said she had a relationship with the Valley before she became a Winter Texan. She also pointed out that she is related to founding members of the Valley – including William Jennings Bryan and Lott. According to her, the Marrs orange is also part of her family ancestry.