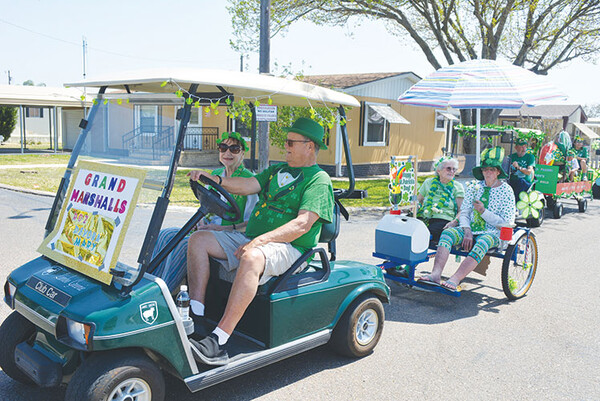 The top winners in the parade held under a cloudless sky featured gnomes, subbing for leprechauns, and shamrocks front and back on the decorated golf cart of Wally and Mary Williams, who passed out pretzel shamrock cookies along the route. The making of the gnomes by Mary, along with a week spent decorating the cart, paid off with a bag of goodies. 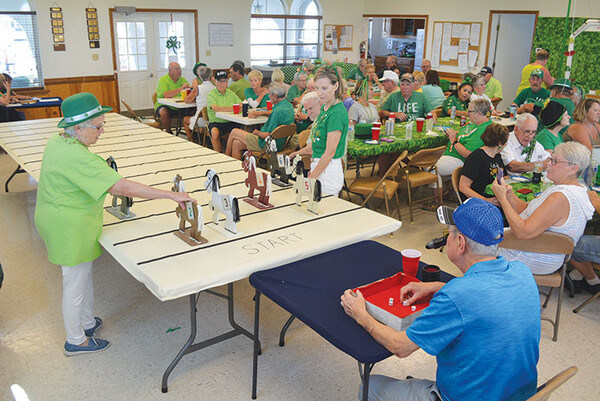 Top prizes also went to Jim and Carol McGowan in the walker category for their “paddy wagon,” a small coaster wagon in which their small Irish Setter was riding. Jim came dressed in an Irish kilt and outfit with his wife in a color matching outfit.

The top animal entry went to Kathy Swanson, who was wearing a dinosaur suit, with a play on the idea of “fossil fuel.”

Another entry was Joe and LeAnn Hummel with an oversize coaster wagon titled “Annie’s Little Red Wagon,” which included a couple of riders along with a traditional rainbow and pot of gold.

Presiding over the annual event were the three parade marshals, all longtime residents at the park. Riding in the golf cart leading the parade, and driven by John Mitts, was Roz Harper. Canadian Devona Slater and Mary Hall rode behind in an attached small cart.

The parade had been preceded by a hamburger bash rather than the usual corn beef and cabbage, with Roger Peterson, of the Poker Brats, grilling the burgers. The entire observance was under the auspices of Audry Stewart and her crew.

After the parade it was off to the races with Warren Pfeiffer calling the four horse races before a large crowd gathered at the track in the clubhouse. Carrol Moering and Tammy Meyers were the jockeys for the day. The horse races were a new feature to the St. Patrick’s Day event. 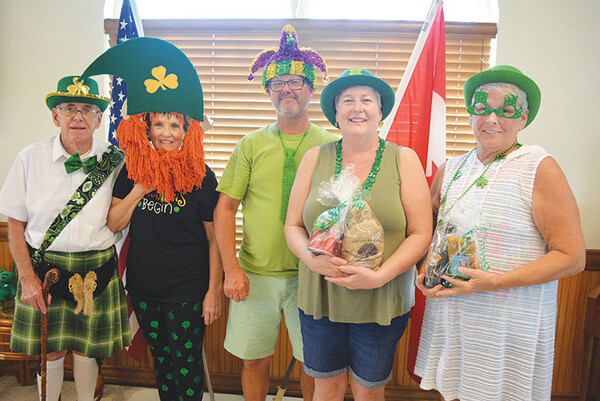 The mostly secular observances across much of the world commemorates St. Patrick as a 5th Century bishop, patron saint and national apostle of Ireland. He is credited for much of the Christianization of the Picts and Anglo Saxons in Ireland.

The back story is Patrick was 16 when he was taken captive from his father’s villa in Britain by Irish raiders and forced into slavery that involved six bleak years as a herdsman. It was a time in which it is said he turned to his Catholic faith. His dream of a ship for his escape became a reality and he fled, finding passage to Britain.

After a while he felt a call to return to Ireland, but hesitated a long time until it was evident to him he must go there. He overcame his reluctance with a zeal for the mission, which took him all over Ireland baptizing, confirming, and launching churches despite the danger of martyrdom. He was a humble man, thankful to God for being chosen a missionary and to bring a message of hope and redemption to hundreds of people.

His great success made Patrick a legendary figure by the 7th Century. The most prominent legend said of him was his use of the three-petal shamrock as an example of the Holy Trinity in explaining God to listeners.

He retired to the town of Saul, Downpatrick, Ireland, where he is said to have died on March 17, 461, a date commemorated annually.