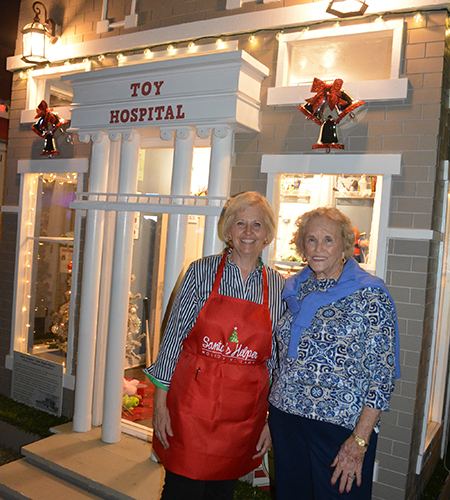 “Five...four...three...two...one” and at the end of the countdown the lights blinked on Monday evening, November 25, for the 10th season of the popular Holiday Village in Brownsville.

The yuletide lighting ceremony of the 33 small cottages in Dean Porter Park drew hundreds of spectators, who were treated to Christmas music by the Sabas Band on the big stage before the lights went on for the first time. Visitors were invited to have one of the thousand free Krispy Kreme donuts handed out, plus participate in a drawing for $1,000 in door prizes. There were also nearly a dozen food vendors on hand as well for those who were hungry and thirsty.

Once the lights went on the crowd turned to looking in the windows of the cottages, including the newest one, the Toy Hospital with its stuffed animals in need of fixing up, which was sponsored by Valley Baptist Medical Center.

Besides the “hospital” the village contains all the buildings one would expect to find in a community and a few unexpected ones, including a courthouse, bank, dental office, gingerbread bakery, sweet shop, accountant’s office, library, holiday mart, Santa’s fisherman shack, dance studio, elf bunkhouse, tree farm and Santa’s workshop.

A number of them are modeled after some of Brownsville’s historic structures, such as Immaculate Conception Cathedral of 1859 and a Victorian home. A couple unusual ones are the school bus and Santa’s Holiday in Space. 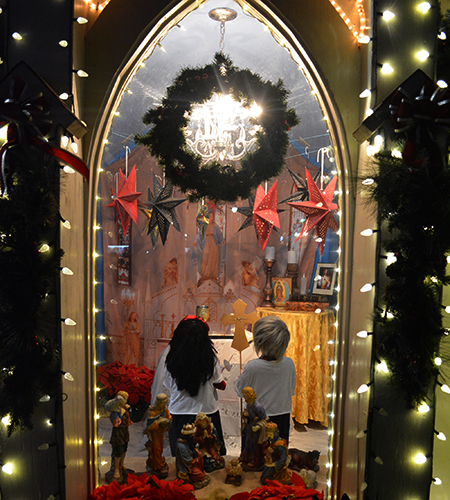 One of those in the crowd was Mellena Connor, who originated the idea of a holiday village in 2009 after seeing something similar that was done in a city in Utah. The Holiday Village was part of her vision to bring something wonderful to the community as part of a renovated Dean Porter Park that now includes the Camille Playhouse and Children’s Museum. The Brownsville native headed the village cottage project for the first six years.

And then the Holiday Village Brownsville Committee members took over, with Laurie Ray taking on the chairmanship in 2015. Ray, who has her own cottage, the library, noted all the cottages are designed by a local architect. About a third of them have been constructed through a Youth Build program for high school students.

The retired librarian says her volunteer job is a year-round effort. It begins in January, assessing the condition of each cottage. Which ones will need refurbishing and do sponsors want to add items to the interior displays? Then there are the cottage sponsorship renewals to check out during the year along with who will be major sponsors.

She has seven other volunteers working with her and three or four more who come part-time starting in the fall each year. They see to the parade of cottages through Brownsville from their storage site in a part of the city’s warehouse at the airport. Each 8 by 10-foot building, which are limited to 14 feet in height, are mounted on wooden pallets. That allows for moving them about and placing them on site.

The only missing element on opening night was Fritter the tiny elf, based on a book about a home with an elf on a shelf, watching a child’s behavior that might be reported to Santa. Fritter didn’t make a hide and seek appearance inside one of the cottages until November 29. Children are encouraged to look for him at a cottage and have a picture taken with him for posting on Facebook, that would enter them in a drawing for daily or weekly prizes provided by Krispy Kreme donuts.

The on-going event, with lots of picture opportunities, also will include local dance and school groups, choirs and others appearing at the park. Check the HolidayVillageBrownsville.com website for listings of the various groups over the next four weeks. And for the kids, Santa Claus will be at the gazebo and available for free pictures every Friday, Saturday and Sunday night in December.

Holiday Village will be open through January 1 with hours from 8 a.m. to 10 p.m. Sunday through Thursday and 8 a.m. to 11 p.m. on Friday and Saturday. The lights come on at 6 p.m. each evening.