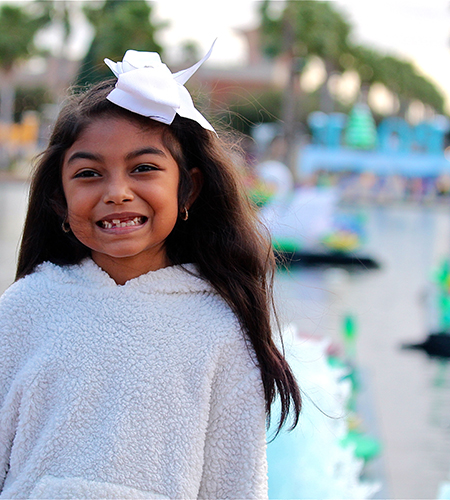 Piercelyn Murray, 8, stared at the green candy dot in her hand.

“Do we need this piece for anything,” she asked.

Her younger sister, Andrea Flores, immediately responded “it goes here.” Then she licked some icing from their gingerbread house off her finger. The piece of candy made it onto the house, but another one soon disappeared, and the look of mischievous victory suddenly glowed from Piercelyn's face.

As thousands of Winter Texans have arrived or are on the trek south to escape the cold and snowy north, they'll be glad to know that if they miss that weather too much, there's always Frio. There's ice, real snow, ice skating and more inside the convention center. Outside – just in case one doesn't want to relive, or get a taste, of what life is like up north during the winter months – there's food, castles, swans, penguins and so much more.

“This is real nice,” said Helen Cepeda, who was with her family celebrating her seventh birthday at the event during its opening weekend. “I got to ride down the penguin slide and make a snowman.”

McAllen also has a 64-foot pre-lit Christmas tree, that stands near the entrance of oval park in the Palms Crossing shopping center. The entire park area and convention center has been transformed into a colorful, bright and cheery winter display (all the bright sides of winter as opposed to the shoveling of snow, melting of ice and bundling in layers like the true north) as the city has become the “official South Pole of Texas.”

People from all over the Valley visited during the first weekend of festivities at the convention center.

Jesuse Cantu and his family came from just down the road in Mission. They had yet to visit the indoor events though, enjoying the spectacular outdoor displays.

“I really like the swans,” Ryleigh Cantu said. “They're so pretty.”

There are a variety of ticket packages for the event, which runs daily until Jan. 6. A general admission ticket costs $4.95 but there are bundled packages to fit different size families and a variety of the attractions, including unlimited rides on the Pinguino Plunge Ice Mountain. 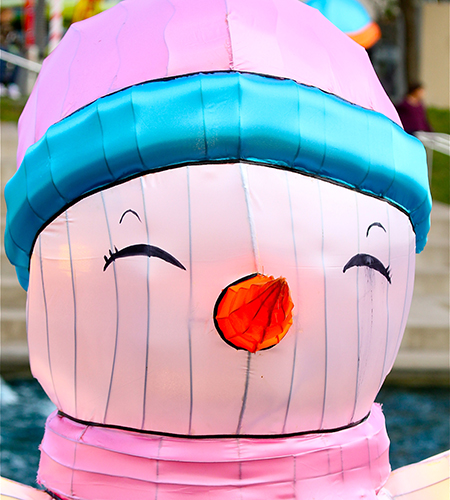 The McAllen Holiday Parade is right around the corner, and organizers are continuing to unveil new exciting features that will delight attendees, all in the spirit of the magical holiday. Kicking off this year’s parade on Saturday, December 7, will be a Holiday Musical Extravaganza, that will feature international singing sensation Mane de la Parra, joined by five hundred fourth and fifth grade choir students from McAllen ISD, and the Valley Symphony Orchestra. Also, part of the Extravaganza will be a Tuba Christmas, as well as local dance group sensation, Razz Matazz. Singing cultural and holiday favorites, the performance will start at 5:30 p.m., in mid-field of McAllen Veterans Memorial Stadium. The performance will be complete with a dazzling fireworks display and decorations that will bring the South Pole of Texas theme to life. A ticket is required for the Extravaganza, but is included in the VIP Stadium Parade seating ticket.

“Each year, we find new ways to make the McAllen Holiday Parade, presented by H-E-B, bigger and better than ever,” said McAllen Mayor Jim Darling. “Everyone who experiences the parade leaves with smiles of wonder and awe and this year will be no different, seeing our own McAllen ISD kids performing with such an iconic and world-renowned celebrity. I really can’t wait!”

Getting to the parade will not be difficult, as the City of McAllen, in partnership with South Texas College, will offer a free McAllen Holiday Parade Park and Ride Polar Express Shuttle from the STC campus on Pecan Boulevard and 29th Street. Starting at 12 p.m. on Saturday, December 7, trolleys will make a continuous loop approximately every 10 minutes, from the pick-off point at STC at 31st Street and Quince Avenue, that will take parade and Christmas in the Park goes to the parade drop-off/pick-up point at Quince Avenue and 23rd Street. The Park and Ride Polar Express Shuttle will run until 12 a.m. People with disabilities, including those in regular or motorized wheelchairs and walkers, should utilize the ADA shuttle pick-up point from 31st Street and FM 495. Strollers are welcome, as are service dogs.

The McAllen Holiday Parade has been named the Best Parade in the World and the Best Parade in Texas, three times. The McAllen Holiday Parade features 55 floats that boast a wattage power of 153,000 watts from just under five miles of rope light; 39 giant character balloons utilize 34,000 cubic feet of helium; and 50 vehicles provide 12,000 horsepower to pull floats along the streets of McAllen.

This year’s McAllen Holiday Parade will be held on Saturday, December 7, 2019, stepping off at 6 p.m. from McAllen Veterans Memorial Stadium, 2001 North Bicentennial Boulevard and is generally thought of as the best seat in the house. General admission and reserved tickets are now on sale. General admission tickets are $10 and are exclusively for the east side of the stadium, while reserved tickets are for $20 or $35 for the west side of the stadium.

Tickets may be purchased online at Ticketmaster.com; expect additional service charges or at face value at the McAllen Convention Center Box Office, located at 700 Convention Center Boulevard. VIP chairs along the route are available for $8 or free seating is found on a first come basis. Go to www.mcallenholidayparade.com for tickets and information.