Day of the Dead altar opens at Alamo Museum 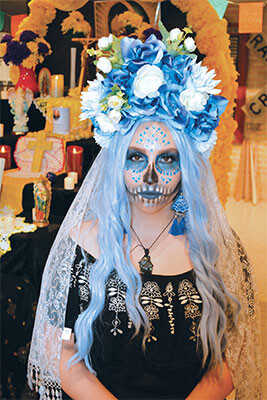 “So glad to see those of you who want to keep the Day of the Dead alive,” said Alex Oyoque, director of City of Alamo Museum during a reception November 1 involving a presentation on the meaning of Dias de Los Muertos by the PSJA Memorial Early College High School’s Spanish Club.

This first ever Day of the Dead altar honored the museum’s late founding member Fire Chief Rolando Espinoza. In addition to Spanish Club members and a few PSJA teachers, about 35 other people attended, including the chief’s widow, Betty, his sisters, Pilar Garza and Armida Gomez, and a dozen other family members.

Angelika Garza, daughter of PSJA Spanish Department teacher Patricia Garza, explained the meaning of the two-day Day of the Dead occasion, mainly celebrated in Mexico and some parts of Central and South America. The holiday has spread in recent years into places like South Texas. It has nothing to do with Halloween traditions it was pointed out.

She noted that participants on Nov. 1 traditionally honor children who have died and Nov. 2 is for remembering deceased adults. Despite the subject matter, Day of the Dead occasions are not so much somber or sad. Rather than mourning, they are festive in celebrating the lives of loved ones. 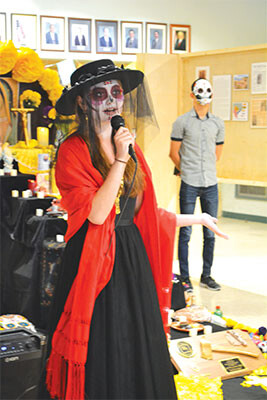 One way to mark the occasion is to have an altar, also known as an “ofrenda.” The club members spent a couple weeks constructing the altar at the museum. They, along with art class, Folkloric, Mariachi, woodshop and Spanish class members also built a larger one at PSJA Memorial High.

The museum altar, which will be on exhibit all of November, symbolizes a shrine to the departed souls. Some altars may be intended to welcome the souls of the dead back for a visit, but most serve as a reminder that the family has not forgotten them.

Sometimes the altar is set up at the grave of the deceased individual, similar in ways to visiting a grave as many do and placing flowers or some personal item like a picture there.

At the museum, all of the usual 13 items are around the altar. These include four main elements—a pitcher of water to quench the thirst of a returning spirit; wind symbolized with paper banners; earth marked with some food, like bread, and fire found in lighted candles as a guide marker.

Decorations can include skulls that are detailed as to specific regions in Mexico and serves as offering reminders. Food often plays a major role, like “pan de Muerto,” or Bread of the Dead. A photo of the deceased person or some important possession may be placed too.

Marigolds are believed to not only be pretty but have a unique scent and bright color to draw a dead soul closer to an altar, even following a strewn path of them. Skeleton figurines are dressed normally and ready to perform everyday activities. Monarch butterflies are more a Mexican tradition associated with their return to winter havens usually about Nov. 1 and some consider them containing the souls of the dead headed for their shrines.

Papel Picado is a fragile, like life, colorful perforated paper placed on the altar with the holes being gateways to shrines for returning souls. Candles serve as beacons to returning souls as do lanterns that for some symbolizes the star of Bethlehem’s guidance. Dog figurines are intended to guide souls to their resting place. 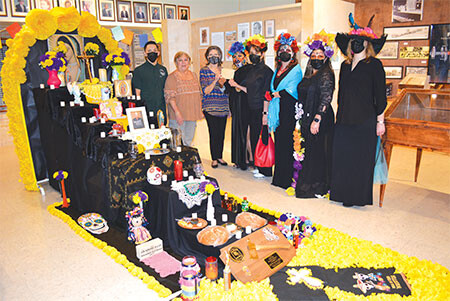 Museum Director Oyoque said he would like to have a Day of the Dead altar every year and it be used to honor at least one deceased individual and possibly several. He thanked the students for the professionalism shown in the altar.

In recognition of the efforts made in constructing the altar, Friends of the Museum President Idolena Vela presented Spanish department head M. Rosario Garcia with a check for $250 for the students’ hard work, dedication and materials purchased.

Besides the reception, the students also spoke the next day about the Day of the Dead to the fifth graders from Marcia Garza Elementary School. They came on a visit to the museum to learn about the El Gato area of south Alamo, which is where their school is located. El Gato stands for “cat” of which there are several types of wildcats that roamed the area.