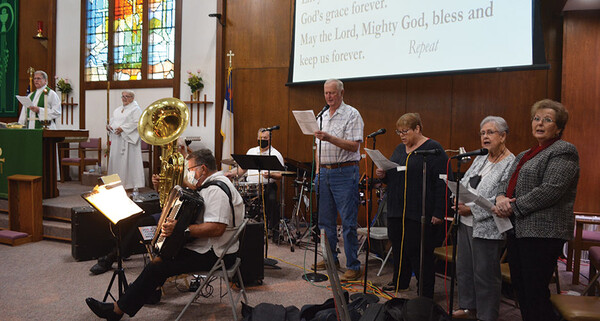 The annual polka service has been taking place, except for last year’s Covid pandemic cancellation, longer than Pastor Steven Herzberg has been at the church. He’s been presiding for 17 years over the annual event, scheduled for the fourth Sunday in January, and related to the church calendar’s recent epiphany date. By the time he came the polka service had been going on for 10 years.

Originally the popular service with the Winter Texans was held in the church gym with three services to accommodate as many as 1,400 members and visitors from other churches, the pastor related. The service was moved into the church sanctuary a few years ago when fewer Winter Texans were coming, along with the benefits of better acoustics.

The way the story goes about the history of the polka service is a former member, Esther Olson, suggested the idea after seeing a story about a Catholic priest who visited bars in his town playing polka melodies to the words of various hymns, according to Pastor Herzberg. She convinced the church to do it, with the first service held in 1995. 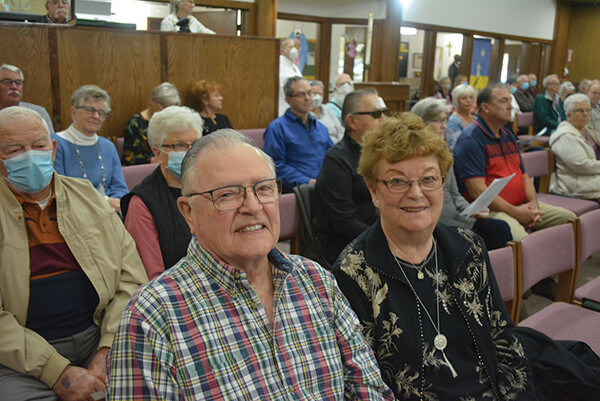 The three-piece band, acquired from a couple of RV parks, was composed of Dennis Schwiebert on the tuba, who has played in all the polka services since he came to the “Valley a decade ago.” He comes from Mission as did Mike Windelic on the drums. It was Windelic’s first time as it was for John Kodja on the accordion, from Weslaco.

Askins has been singing at the polka services for 17 years, ever since coming to take care of her mother, who had moved to the “Valley with her husband in 1971.” Askins and her husband, David, who is head usher at Our Savior, became converted Texans. She said they found good friends in the church and at Paradise Resort Estates in Pharr where they live. The couple does get away for about six weeks in the summer to see their kids and grandkids up north.

One of the reasons Askins likes doing the service is her liking of polkas. That stems from her recalling years ago of her grandfather teaching her to dance when her family resided in northwest Ohio.

Enjoying polka time hymns were Jim and Marge Demaree, Winter Texans from Minnesota, and regular attenders for the past six years at Our Savior. The couple, who stay at Tip-O-Texas RV Resort in Pharr, have come to many of the polka services since coming to the “Valley 15 years ago at the invitation of friends from their hometown.”

They indicated the big attraction in the “Valley” for them was square dancing, plus they enjoyed the entertainment, fellowship at church and the friends they made here.

As the music brought joy, so did the message from Pastor Herzberg, reminding those who gathered that “the joy of the Lord is your strength” from the book of Nehemiah. And in Psalm 119 there is joy to be found in meditating on God’s laws, decrees, precepts, statutes, commandments, and ordinances. Finally, there is joy found in the Lord Jesus, who told an audience recorded in Luke 4 that he fulfills what has been written about Him in the scriptures.
Pastor Herzberg concluded the service with a thanks to the polka band for helping to continue the polka service tradition, and to everyone for their support over the past 27 years.