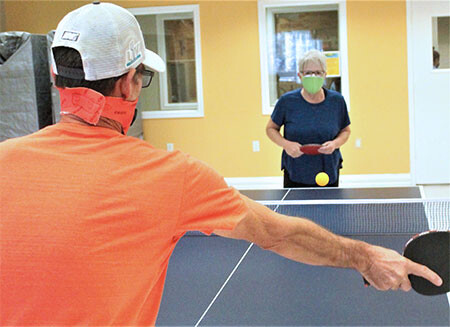 “I'm hooked,” said the Michigan native who now lives full time at the park. “I didn't start playing until my first summer here. Because of an illness, I can't do anything outdoors, so I thought I'd give this a shot.” 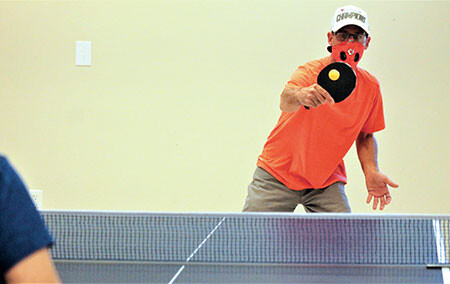 Now, she and Mike Abbott can be found regularly getting more than just a mild workout in, blasting away at the plastic ball in hopes of winning a rally.

The sport originated in England, played among the upper-class as an after dinner parlour game. Back then books stood up along the center of the table as a net and two more books were used as paddles and were used to hit a golf ball.

Of course, now there's a net and paddles, covered with various types and thickness of rubber, wood or sandpaper. There are also different styles of play enjoyed by everyone.

“I like to stay close to the table,” Easton said. “I can't let his (Abbott's) spins take off and get away from me.”

Abbott, of Kansas City, Mo., who made his way to Victoria Palms five years ago via Mississippi, has many years of experience behind him and enjoys several styles, often hitting the ball and having rallies from 2-3 feet beyond the end of the table. Every so often, you'll also see him drop low to return a shot, known as playing under the table. 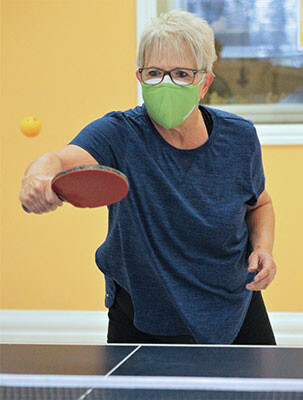 “I've played my whole life,” Abbott said. “A guy who lived next door to me was a Junior College winner in Oklahoma and he really got me into it. I like hitting my backhand and I have a feel for the net and sometimes I'll play under the table. Your opponent has a harder time picking up the ball when you play that way.”

Easton said there are about 20-22 people who regularly play at the park, most of them haven't returned for the upcoming winter season. That, however, hasn't slowed down Easton, Abbott, or the few other players who enjoy a friendly, but sweat building – but intense – rally or two. Abbott and Easton said they'll play an hour or longer when they arrive. It's because of that time invested that Easton says has made her a better player.

“I enjoy when I can beat one of the guys, and it's happening more often,” she said, laughing while still being completely serious. “And he (Abbott) shows no mercy on me.”

“Nope,” Abbott replied. “She makes me better and I make her better so that works out fine.”

The biggest change COVID-19 has brought to Victoria Palms' table tennis – or ping pong – community has been to remove doubles play and keeping it strictly singles play, to maintain social distancing. They also sanitize the tabletops, the table covers, nets and everyone is required to bring their own equipment.

“It takes us about 15 minutes to set it all up and another 15 to take it down,” Easton said. “But we were doing that anyway, now we're just spraying and sanitizing.”