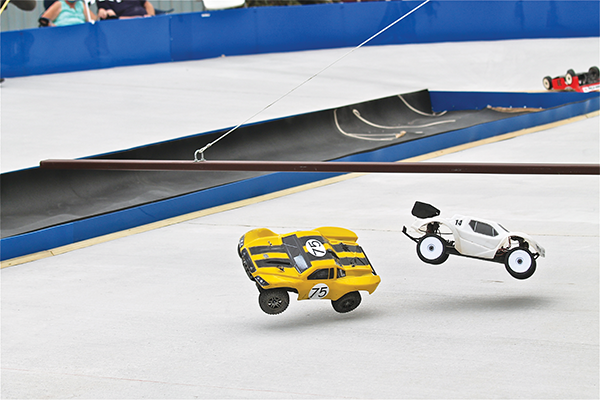 “No, no he didn’t slam you, he didn’t bump you, he didn’t nudge you… he rubbed you. And rubbin’ son is racin’.” -- Robert Duvall as Harry Hoggie in the hit movie “Days of Thunder.”

Cars blazed down the front-stretch, at one point hitting three and four wide on the cement track similar to the NASCAR venue in Dover, Delaware. The biggest difference here, however, was that sometimes when the cars were three and four wide, they weren’t all going in the same direction. 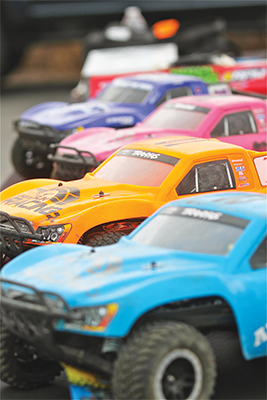 Thus, is the world of R/C racing.

Alamo Rec RV Park in Alamo held a soft opening for its remote car racing tracks, with more than 25 races, mainly on their brand-new cement track that highlighted the skills of R/C drivers, which included not just Winter Texan RV parks but was also open to the public. Dozens of R/C enthusiasts brought with them more than 100 cars, all looking for the right setup to maneuver the fast, slick track.

That perfect setup usually involved the correct balance of suspension and tires, among other things.

“It’s all about tires and suspension, shocks and springs. It’s what the whole thing is based on,” said Doug Karthein, a Wisconsin native who has been R/C racing since he was 20, for 47 years. He owned two tracks in Wisconsin and said that he, along with fellow park resident Dwight Benoit, designed and built the first oval track in the Valley. “I had hard tires racing on the cement track and it wouldn’t hold. I put some soft tires and it made all the difference. I was really flying with the other tires but couldn’t make the turns.”

Different types of surfaces need more or less traction from the tires. The slicker the track, the more traction is needed.

Cars did not do much rubbin’, but there were certainly several times when they did do some slammin’, sending one or many sliding, rolling, tumbling, or flying upside down all over the track.

But, there was also some exciting NASCAR-esque racing moments. During one race, with husband-and-wife duo Patty and “Tall” Paul Sterkowitz battling it out, one would pass along the inside lanes on one turn, only to be passed back through the other turn, reminiscent of the breathtaking battles between NASCAR greats Dale Earnhardt and Mark Martin at the egg-shaped oval known as Darlington Raceway.

“In our own park, we race each other often and follow the rules,” said Paul, who lives at Fun n Sun RV Park in San Benito. “We don’t take the other car out and we follow behind, waiting for an opening to go for it. That’s what we’re used to doing. It looks pretty slick too.” 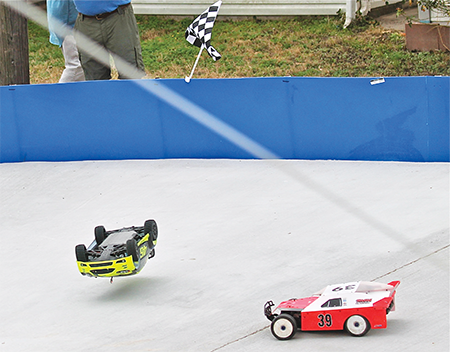 The Sterkowitzes have been racing together for about four years. Paul said when the group of R/C enthusiasts started at his park there were eight members. Now, there are more than 100.

Drivers brought their vehicles out in all shapes, colors, and sizes. Some brought them to display, others to sell. Chicken dinners and drinks and 50/50 raffles were drawn throughout the day. Many Winter Texan Parks had teams of drivers, wearing their race day outfits to commemorate the precursor to the grand opening event coming later this month.

“This was to see what kind of response we would get from the public,” Karthein said. “It’s been wonderful, the turnout is huge and there’s been nothing but positive results.”

Racing has exploded, seemingly exponentially, in the Valley’s Winter Texan parks since that first oval track was built in 2014. Now there are more than 20 tracks at parks across the Valley. There are some parks that have series/leagues and Karthein said they were going to try and bring back a racing series to Alamo Rec where races will take place on their dirt, mini and concrete tracks.

“There’s a lot of interest in this from the parks and the outside public,” Karthein said. “We thought we could bring the public in once we had the concrete track up. It’s been nothing but positive comments.”