Square Dancing: A symphony for the floor 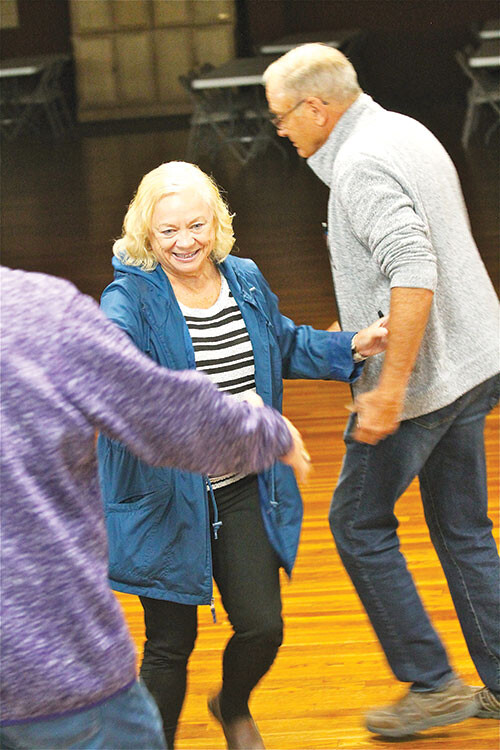 A revival may be coming for those interested in square dancing.

Lessons and square dances are popping up at Winter Texan parks across the Valley. More importantly, both veterans and “newbies” are finding a keen interest in taking part.

Chuck Berry, not to be confused with the rock 'n roll Chuck Berry, and his wife Phyllis are part of the newbie group.

“We started just about a month ago and saw that Robert was offering it,” said the Topeka, Kansas resident who lives at Tradewinds RV Park. “We've taken some Western dancing, but we were raised on classic rock 'n roll. I had an aunt and uncle that square danced, and it looked kinda cool but never got involved.”

With appropriate music playing in the background, Ferguson would make calls such as Circle Left, Allemande Left, Do Si Do, Right and Left Grand and others, creating a dance where, when all the partners are in sync, is much like watching a symphony perform in perfect rhythm.

Donna Ferguson (no relation) would know a lot about that. A C-1 (highly advanced) dancer from Fulton City, Wisconsin, is in her 24th year coming to the Valley. She began square dancing before she started making the treks to the RGV.

“I married a man who loved to square dance and he wanted to go square dancing,” she said. “I stuck it out and he didn't.”

Donna began square dancing in 1986. She remembers running into several people who recalled to her that their first memory of square dancing began in the high schools, with one week of gym class reserved to learn the basics.

She had already “put in two hours of square dancing this morning,” and came wanting to share some advice for the beginners.

“Pay attention to my shoes,” she said. “They are bowling shoes. They don't slip but they let me slide enough on my feet where I just don't stop like in tennis shoes. That is the best advice I ever received from square dancing. You can order them on the computer but get a quality name. They'll last you.”

Donna added that she's not much of a television watcher but thoroughly enjoys reading. However, “I'd prefer to be out dancing, especially during the day.” In fact, her plan was to go home and call up a friend to plan some more outings.

Ferguson teaches at Mission Bell in Mission, but there are others out there. Take a look at our Parks Calendar to find other classes and square dances throughout the Valley.