Quilters fulfill a need in Penitas 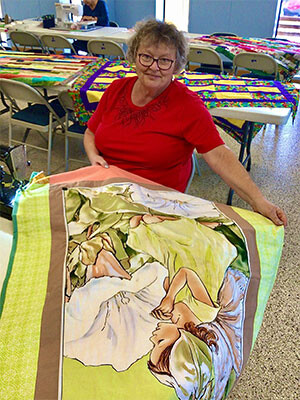 Dee Pemberton sat in her corner, on her own, just plugging away at sewing quilts.

“Then we found out what she was doing,” Catherine Raftery said. “And we joined her immediately.”

Pemberton was using donations of fabric from members at her church to make quilts to donate for the children living in the Tent City in Brownsville. Last December, Raftery, Pemberton and the remainder of quilters from the Aladdin Villas in Mission, donated 72 quilts to the organization Mateo 25:35. 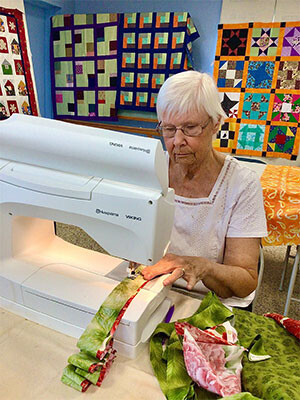 “We handed 72 quilts for these babies and some of the children were just hugging their quilts.”

After donating those quilts, the group began working on quilts for this year. They just didn’t have a place to donate too.

They reached out to Colette Walsh, a Mission resident who is a liaison between many who want to give and many who are in need. She connected with Proyecto Desarrollo Humano and Sisters Caroline and Fatima in Penitas. The community, Walsh said, lives below the poverty line and, if one visits the area “you’ll see kids getting washed with the water hose outside. They aren’t doing it out of fun, but necessity,” she said.

“They’ve done amazing things out there and it has a been a very meaningful organization for me,” Walsh said. “They have a thrift store out there where the residents can go and buy things they need – like nice Levi’s for maybe $2. They sell it to give the families ownership in their community, the pride of ownership and that ability to provide for others.”

So, when there’s a need, it’s the thrift store’s director Libby who is, as Walsh called her, “the connector.”

“She knows so many people out there,” Walsh said. “She’s the connector.” 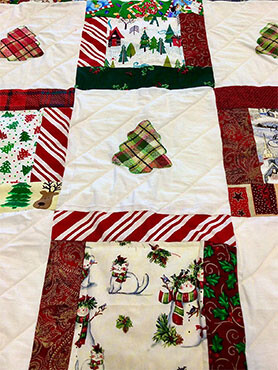 And now all of them are a makeshift assembly line that begins with the 12 ladies who form the Aladdin Villages sewing/quilting group.

Raftery and her husband moved from Ireland to South Texas nine years ago. Not a stranger to sewing, Raftery would create costumes during Halloween for her children and once those children reached high school she would make the costumes for the characters of the high school play.

“I’ve been sewing all my life and always had a sewing machine but never did anything like this,” she said. “There’s a peacefulness to it. Sometimes it’s aggravating when you’re doing something complicated, but for the most part it’s just relaxing and gives you something to focus on.”

A room filled with beautiful quilts, blankets and other projects is a tell-tale sign of the commitment the group has while working to serve the local community for those in need, along with working on some of their own personal projects.

“That first round of blankets were made with love,” Raftery said. “We all have so much but we’re always in pursuit of more.”

For more information on Proyecto Desarrollo Humano, you can find them on Facebook.