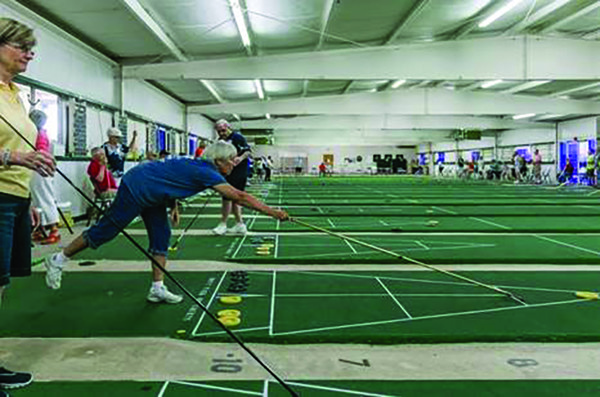 Ann Engell is a world-class competitor. Talking to her leaves no doubt.

When she was diagnosed with Parkinson’s, the athlete who played baseball, volleyball and pickle ball, started preparing for the future. But the competitive spirit hasn’t changed... in fact, it may be greater now than ever.

“Well, I decided to play shuffleboard first because my husband needed a partner,” she said. “But I knew I would need to transition from more motor sports into something that would take less of my motor skills and not be as physically demanding.”

Now, just four years after taking up the sport, she and her husband Evan are world class competitors. In fact, they have been to two world championships and now Ann is organizing the 40th International Shuffleboard Association World Championship to be held at the Fun n Sun Resort in San Benito. Approximately 140 of the best shufflers from nine different countries are expected to take up 16 of the resort’s 17 indoor courts for the event, October 17-22, 2021.

Engell, who says she has no title really at the park, is the event organizer. “We need this much time to get prepared for this event,” she said. “There’s a lot to be done.”

The couple has been coming to the Valley for nine years and has spent the past seven at Sun n Fun. Evan, her husband, has been playing the sport for eight years.

“He has shuffled longer, and he shuffled with his dad a few times,” Ann said. “Since we’ve been coming to the Valley, he plays more full time in the Winter. We stay for four months and have gotten to know people throughout the Valley.”

“We pitched it out there in Austria and they approved it while we were still out there,” Ann said.

Teams are now expected to compete from nine countries: The United States, Canada, Australia, Austria, Brazil, Germany, Great Britain, Japan and Norway. Ann and her husband are expecting to be on the Canadian team again; they hail from Southwestern Ontario, Canada.

“This is the only place in the Valley with indoor shuffleboard courts and we have 16 of them, we need 16,” Ann said. “We can play in the rain, the heat or the cold. We have world class facilities and amenities because people will come and bring families and will want to do things.”

That is what Ann and her volunteers and helpers will be focused on for the next 22 months — looking for sponsors, adding volunteers, contracting for housing, hosting, feeding and transporting the guests, among other duties.

But there’s still the competition and getting ready to play as well. Ann said there are few places better than the Valley to prepare for this event.

“The quality of play at least rivals what we went up against in Austria at that worlds championship,” she said. “There are great shufflers in the Valley and many of them play once a week, up to daily. If you play daily, you’re going to get better with all those repetitions. And the more you play with higher-skilled players, the better you become.”

Ann said she comes from a competitive family. “That’s our spirit,” she said. “It’s a competitive spirit and it’s the whole family.”

To get in touch with Ann Engell for more information on volunteering or sponsorship, you can email her at ann@northshore.tax.

She also noted the participation in the competition held in Austria in November.