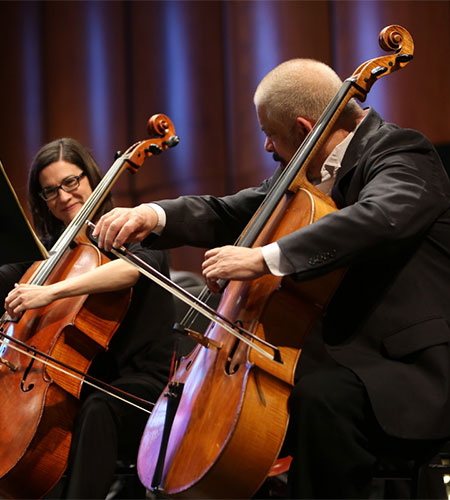 The Valley Symphony Orchestra and Peter Dabrowski, music director/conductor, announced the launch of the 2019-20 concert season in August at a special event. The season opened with a back to school concert in September.

The season will also include a performance of music from the James Bond films and a guest appearance from UTRGV’s Ballet Folklorico. Maestro Dabrowski announced that special guests Mariachi Aztlan will perform as part of the season finale concert.

“Mariachi Aztlan is one of the best ensembles in the United States, and we are thrilled that they will be performing with our orchestra,” said Dabrowski.

“Our patrons have been asking for a more flexible option, and we are pleased to offer a package this year that includes the music of the James Bond and Indiana Jones films, plus our beloved ‘A Touch of Frost’,” said Coy.

The James Bond Meets Brahms, two men of mystery – one incredible concert, will be held October 25. The concert will feature The Best of Bond (Barry/Tyzik), symphony No. 3 (Brahms), and Hungarian Dance No. 6 (Brahms/Schmeling).

The VSO’s annual holiday performance, A Touch of Frost, will take place December 13. The concert will feature the VSO Chorale, UTRGV’s Ballet Folklorico and selections from favorites such as Handel’s Messiah and The Nutcracker.

A musical adventure to the corners of the Earth and across the American west will feature Indiana Jones and the Wild West themed music on February 28. Music includes Scherzo Capriccioso by Dvorak, Trumpet Conerto by Artunian and featuring trumpetist Jared Broussard, The Big County Suite by Moross and Raiders of the Lost Ark: Raiders March by Williams.

The VSO Season Finale Event, designed by Dabrowski, will be held March 27. Music will include the Hungarian March by Berlioz, Violin Concerto No. 2, La Camanella by Paganini featuring violinist Geoffrey Wong, Crystal Horizon by Writer. Specials guests Mariachi Aztlan will perform Bolero by Ravel with the orchestra.

The three-concert, $125 package is currently available for purchase. Seats in all sections are still available. Subscriber benefits include guaranteed annual seat reservation period ahead of the general public, first notice on all upgrades, exclusive guest artist information and content, no hassle ticket replacements for lost or misplaced tickets and much more.

Concerts will be held at the McAllen Performing Arts Center, at 801 Convention Center Blvd. in McAllen, from 8 to 10 p.m. For a complete list of concerts, music repertoire and guest artist information, visit VSO online at www.valleyorchestra.org or call the office at 956-661-1615.