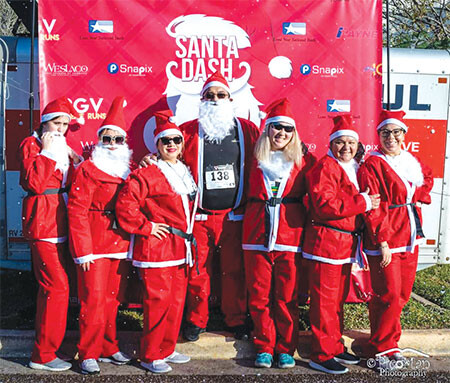 While there have been a few cities that have already had some of their Christmas celebrations – tree lightings, parades – this past week, there are still several cities throughout the Valley that are doing their start of Christmas season celebrations this week and next weekend. If your city isn’t listed, look for them online or on Facebook to see if they are having an event.

The City of San Benito will host their Community Christmas and Tree Lighting from 5 to 7 p.m. at W.H. Heavin Memorial Park on Saturday, December 4.

The City of San Benito will have their 79th Annual Christmas Parade titled Christmas in Toyland. The parade will begin at 6 p.m. on Sam Houston Blvd. on Saturday December 11. For more information, contact Parks and Recreation Department at (956) 361-3800, or visit cityofsanbenito.com.

The Edinburg Chamber of Commerce and City of Edinburg proudly present their Annual Night of Lights Parade on Friday, December 3. The parade will take place at 7 p.m. in the Edinburg downtown district.

Weslaco will have their Tree Lighting Ceremony at 6 p.m. this evening. The event will be held at the Weslcao City Hall parking lot. The light display will be up until early January.

Weslaco will host their Santa Dash Fun Run on December 11, 5 p.m. down Texas Blvd. Info can be found on their Facebook page.

Weslaco’s Lighted Christmas Parade will also be on December 11, at 6 p.m., down Texas Blvd.

Weslaco will have a special Mid-Valley holiday themed farmers market with live music and activities on December 18 at 10 a.m. The event will be held at the Weslaco City Hall parking lot.

McAllen will kick-off the Christmas season with their 9th annual Tree Lighting Ceremony at the McAllen Convention Center Oval Park today, December 1, starting at 5:30 p.m. Enjoy holiday musical performances right before the 64-foot, pre-lit Christmas tree will light up Oval Park, along with millions of lights that will be featured in South Pole Illuminated Festival. The South Pole of Texas will be illuminated through January 2.

McAllen will have their big Holiday Parade this weekend, Saturday, December 4, from the McAllen Veterans Memorial Stadium, 2001 N. Bicentennial Blvd., at 6 p.m. Check www.ticketmaster.com, the McAllen Performing Arts Center Box Office, or any McAllen community centers to see if there are still tickets are chairs still available. The parade will be broadcast on Christmas day at noon on local Telemundo stations.

The City of Alamo will be celebrating their Winter Wonderland Parade on Saturday, December 11. Parade starts at HEB at 6:15 p.m. and head southbound to Downtown Central park. There will be school choirs, bands, and other groups performing after the parade as well. Food vendors will be available. 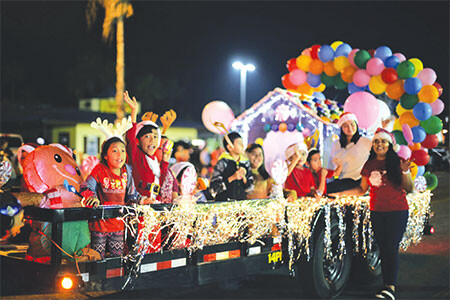 On Friday, December 3, SPI will host their 32nd Annual Christmas Street Parade at 6 p.m. beginning on Mars St. to Kingfish St. Then on Saturday, December 4, a Lighted Boat Parade will be held on South Padre Island starting at 6 p.m. The route begins at the Sea Ranch Marina. There will be designated viewing areas throughout the route.

Through January 16, SPI will have their Holiday Light Show with synchronized festive music that is played in 15-minute intervals, daily from 6 to 9 p.m. at the SPI Convention Center.

City of Mercedes presents A White Christmas Parade, on Texas Ave., starting at 6 p.m. on Friday, December 3. Visit and enjoy the sights and sounds of the season along with food. 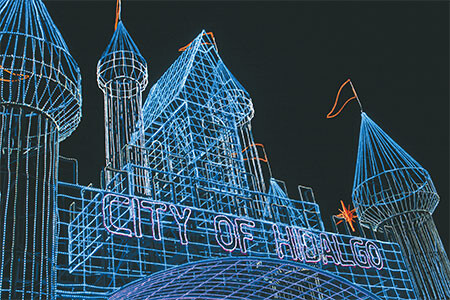 Hidalgo Festival of Lights celebrates 30 years by having a drive-thru event at the Payne Arena. Admission must be purchased online before arriving at the event. The event will be held from 6 to 10 p.m. Monday through Thursday, and 6 to 11 p.m. Friday through Sunday. Dash passes, general admission tickets, train tickets and special holiday/weekend tickets are available.

The drive-thru Christmas lights experience will be opened nightly through the entire month of December. There will be two miles of over five million lights, several lighted tunnels and over 500 holiday displays. Holiday music will be transmitted via FM. Hot coca and sweet treat drive-up concessions will be available.

A full schedule of events can be found online at hidalgofestivaloflights.com, or on their social media websites.

Brownsville Holiday Village will be on display at Dean Porter Park through January 1. Houses will be lit up at 6 p.m. every night. There will be entertainment throughout the period and Santa will be available for pictures on the weekends. Visit http://www.holidayvillagebrownsville.com/ for their full schedule of events.