A Tejano Christmas Carol is back in Pharr 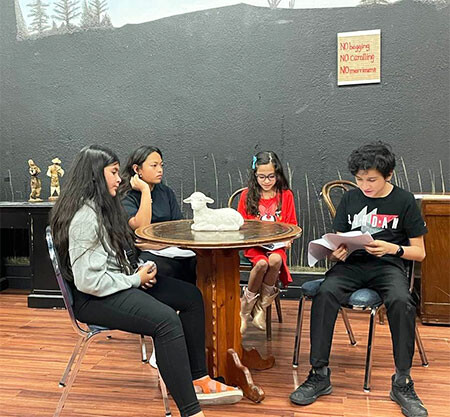 It was the night before Christmas and a distasteful Rio Grande Valley Attorney by the name of Ezequiel Codos, played by 18-year-old Frankie Hooton, from Weslaco, was working late in his office while his overworked and underpaid employee Pablo Gomez, played by 16-year-old Raul Ceron from McAllen, typed away the water right contracts for Mr. Codos before heading home that Christmas Eve. Suddenly a charity worker comes in and Codos runs him out with snarls and complaints. He also throws out his nephew Beto who stops by to invite the old miser to Christmas dinner…and so goes the familiar story but with a twist of characters.

This contemporary version set in the Rio Grande Valley, includes the appearance of Tejano singer Selena, as one of the three spirits, played by 12-year-old Brooklyn Dillard from Weslaco, and plenty of other tweaked characters that make-up the south Texas setting for this classic Dickens tale.

“This play returns for its 5th year in a row,” said Pharr Community Theater Co. Producer, Pedro Garcia. “But this time all the roles, except two parts, will be played by teenagers and children making it fun, animated if you will, for the entire family.” 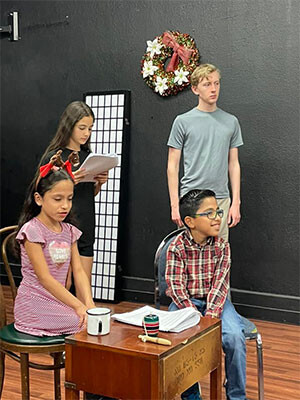 All the youngsters in this quick, two-act play, in English, are under the guidance of director Seres Jaime Magaña from McAllen.

“I’ve directed the play the last two years with adults and children, but this time the challenge was with a younger cast, and I was up for it”, said Magaña, a 30-year-old UTRGV graduate, husband and father of four. “I love the voices of the kids and their demeanor in these roles. They add a new dimension to spirit, while keeping true to their interpretation. Everyone is going to have a blast”.

This time at the helm, playing the role of Codos is Frankie Hooton, who is also the president of his student council at IDEA Weslaco Pike College-Prep High.

“Frankie has been in this play a couple of times in the past, playing other parts, and in several other PCT productions.” added Garcia. “He’s one of our young veterans and has improved each time as an actor. He’s entering college soon but before he does, he’s taking on his biggest role yet, and he’s going to be delightful,” said Garcia.

“Playing the role of Codos takes a lot of time and emotion, conveying this incredibly, stingy, hateful man who detests holidays, especially Christmas… because of choices and things that happened in his past, and then showing his transformation, turning a new leaf is taxing, and it takes time to get it right, it’s challenging, but I’m enjoying the experience”, added young Hooton.

“There are nearly 18 youngsters involved in the telling of the story, each adding their embellished personality, and some doubling parts. It’s an experience of a lifetime for them,” concluded Garcia.

The play runs from December 14 through December 19 including two outdoor shows and three indoor shows, all in Pharr. Tickets will only be sold at each show starting one hour before curtain. At the outdoor shows, donations will be accepted as your admission, pay whatever you wish to give. At the indoor shows, tickets will be $5 per person and/or two tickets for $5 for those under thirteen or $3 each.

Photo caption Two: Standing is Brooklyn Dillard & Frankie Hooton, while sitting are Carolina & Alejandro Rivera carefully practicing their parts in A Tejano Christmas Carol. All 22 roles in the play, except two, will be played by children and teens.