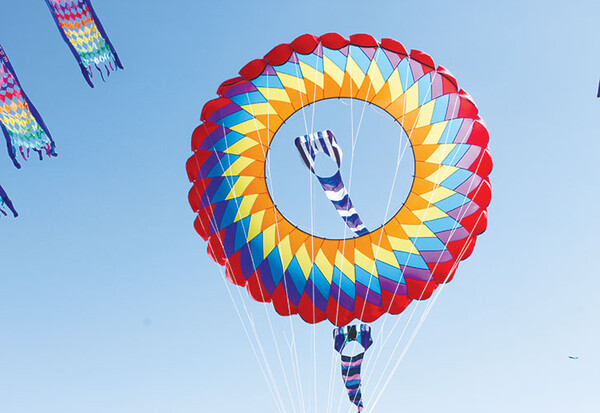 The SPI Kite Fest was quick and easy to spot, with very few clouds in the sky some kites could be clearly seen from the other side of the bridge in Port Isabel. I followed a line of cars weaving across the flats next to the SPI Convention Centre, found a parking space of sorts, and took some time in the car to layer on some gloves, a scarf, and a beanie. The weather was hovering around the high 40s to low 50s, but there was a pretty intense wind as well. This wind I’m sure, though I’m not a kite-flier, was beneficial to the dozens of kites that were maintaining their place in the sky. 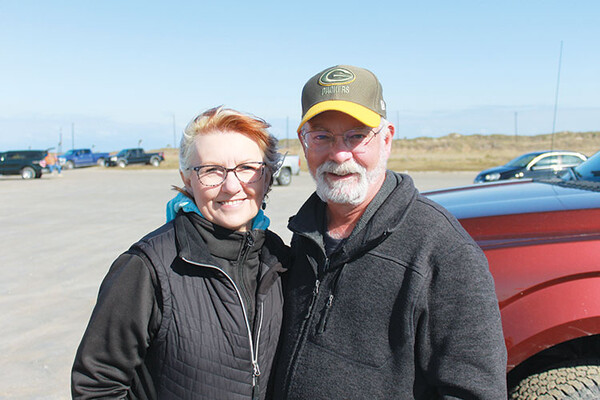 With camera in hand, I instantly went towards the right side of the flats, my eye on a massive five-tiered kite along with various whales and penguins. As I was taking photos, I was vaguely listening to the announcer that was on the other side. There were members from multiple groups doing choreographed routines to songs such as House of the Rising Sun and Cliffs of Dover. After circling around I watched one of these routines, this one done to an energetic electronic song. I realized the kites that I thought were remote controlled because they zoomed and did sharp maneuvers so rapidly loud buzzing noises could be heard, were actually manually controlled. These kites were smaller and had a more aerodynamic design, and the performers definitely made use of the large amount of space that was marked off for them. After every performance a round of honking crescendoed, so if the wind was a bit too much for you spectating could be easily done from your vehicle.

Walking around the performance area, there was another batch of kites including a couple of squids and other animals. Here you had to watch your step a bit to make sure you didn’t trip over any of the lines and potentially bring down a kite. Being a bit of a klutz, I opted to stay close to a line of cars to continue taking pictures. Then rounding back to the entrance there was a group of crabs that flew along the ground, leaving arches in the sand as they swayed to and fro.

When coming in I had noticed the various out of state license plates and Winter Texan bumper stickers, so after warming up in the car a bit I went back out to see how some were enjoying the fest.

Jeff and Bobbianne from Wisconsin said they were enjoying the kites, sunshine, and colors. Their experience with flying kites was mostly in crashing them as kids but they still found them nice to look at.

All the way from Canada was Howard and Trudy Maynard, they had actually been to SPI Kite Fest two years previously and bought some kites to fly themselves at that time. The beach and people down here have had them returning as Winter Texans.

Before the fest closed a synchronized routine was done by six kite fliers with those same aerodynamic kites. I watched this from my car and even then, it was impressive to see.

SPI Kite fest brought out a range of kites in colors and shapes I didn’t know existed and a multitude of people together for a fun, bright day. Even a variety of dogs had a good time with their owners out on the breezy flats.