Dave and Daphne are here to entertain 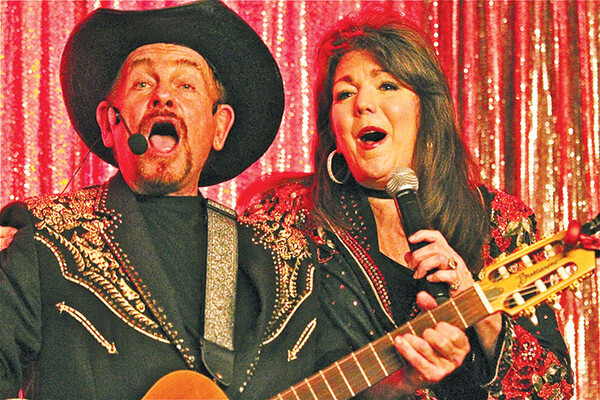 Dave and Daphne are here throughout the month of February entertaining the Winter Texans at several Winter Texan parks throughout the Valley. They even have a couple of shows in March this year. Look at their half page ad in this week’s paper.

The duet has won the Valley Star Award for Duet Musical Group of the Year on more than one occasion and are up for nomination again this year. There is no mistaking why they have won the award and continue to be on that favored list of Wintertainers™.

In 2018, Dave and Daphne stole the show at the Valley Star Awards with performances of “Hey Good Looking,” “Somewhere Over the Rainbow,” and Dave’s fast finger performance of “Flight of the Bumble Bee” that he performs, by himself, on dueling banjos. The duet has also been known to perform songs such as “I Will Always Love You,” “Always on my Mind,” and many other great songs.
What brings emotion to the crowd is their powerful rendition of “The Lord’s Prayer” and their tribute to veterans that includes “Where the Eagles Fly” and “God Bless America.”

Dave Slayer has toured the world with Barbara Mandrell, performed for presidents, and has appeared on countless TV shows. Roy Clark proclaimed Dave as one of the most fabulous guitarists on the planet. Dave credits his uncles, (Bluegrass legends and Grand Ole Opry members) Jim and Jesse McReynolds and the Virginia Boys, for his love of music and musical ability and talents.
When not on tour, he performs with his uncle Jesse at the Grand Ole Opry. His repertoire ranges from “Orange Blosson Special,” to “The Flight of the Bumble Bee,” and from “Wildwood Flower” to “The William Tell Overture.”

He is an accomplished vocalist, songwriter, and humorist. But most of all, he is just a regular guy with a God-given talent to touch people with his music.

Daphne Anderson is a beautiful female vocalist born and raised in Albany, Georgia. She has performed in pageants, talent contests, and churches. She has toured with some of the greatest southern gospel music groups of all time, including The Bill Gaither Group, the Florida Boys, The Hinsons, and many others.

During that time, she was voted Female Vocalist of the Year by the Southern Gospel Music Association. Shortly after graduating from Georgia Southwestern University, she moved to Nashville to pursue her music career.

Daphne has been described as a cross between Shania Twain and Patsy Cline. She’s quick witted and super talented. Her impressions of country music legends Tammy Wynette, Loretta Lynn, and the aforementioned Patsy Cline are phenomenal.

The duet says it is a privilege to entertain here in the Rio Grande Valley.

“We often tell our audiences that we can’t be us without you. Thank you for allowing us to do what we love.”