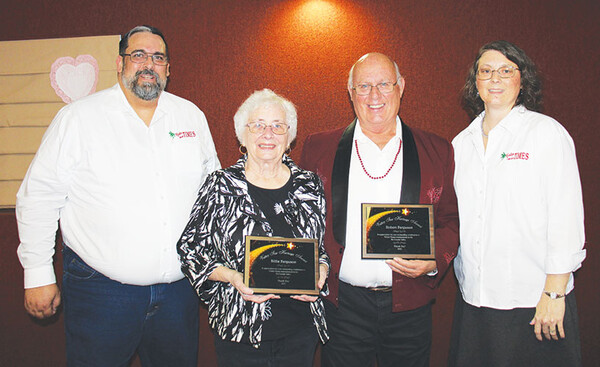 As we closed out our 11th Annual Valley Star Awards show, we found ourselves at a crossroads that we come to from time to time when we decide it is time to honor someone for their special contributions to the Wintertainers and the Winter Texans they come to entertain.

Robert and Billie Ferguson were presented the Valley Star Awards Heritage Award last week to honor all their contributions to the Winter Texan community. This is the fifth time the award has been given, as it isn’t an award given lightly. It was well deserved by these two that have given so much and will be dearly missed as they retire from the Valley scene. 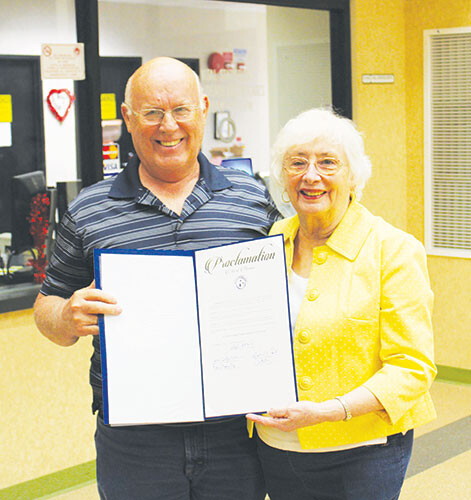 These two people have been instrumental pieces in the Winter Texan community for so many years – serving as activity directors in a number of parks; serving on the Activity Directors Association board for over 10 years; building, booking, and producing two very successful showcases set up to bring together the Wintertainers™ and Activity Directors; and just simply being there for anyone that needed advice or assistance running their activity programs.

Robert has been known by many names and one of them was Mr. Entertainment. Both Robert and Billie made it their job to know all the entertainers, newcomers, and old timers alike. They always knew who the best talent was and what parks could expect from any given performer or group.

They organized the showcases – something they did for 17 years – which became the most sought-after event in the Valley for entertainers. They all knew, that was the place they had to be if they wanted an opportunity to showcase their talent for hundreds of activity directors.

For many years the Winter Texan Times ran the Winter Texan Favorites Survey. While our writer at the time did her best to pick out Wintertainers™ that were visiting the Valley for each category, it was a struggle. Thankfully, after a number of years two “good people” contacted Jim Brunson, previous owner and publisher of the Winter Texan Times, to collaborate on this special project.

These two made the annual survey bigger and better by helping to organize the selection of nominees and run an actual show – ultimately creating the Valley Star Awards. They have been solely responsible for putting on a great show for 11 solid years, even pivoting and creating a Pandemic-safe outdoor show for us last year.

We have thoroughly enjoyed partnering with these two from the inception of the Valley Star Awards Show. We have learned a lot from these two and we can only hope that we can measure up and continue to maintain the very high standards of professionalism, fairness, and quality.

“They definitely had the interests of the Activity Directors as their priority,” said Peter Loring at Seven Oaks, of their commitment to the activity directors and the association.

They are an amazing team, contributed Maude from Casa del Valle. They share, they care, and are so organized – all reasons they have made such a huge impact on those they have served. They make one feel important no matter whether you’re an entertainer or a volunteer. Being part of their team has been one of the most wonderful and memorable experiences for so many. 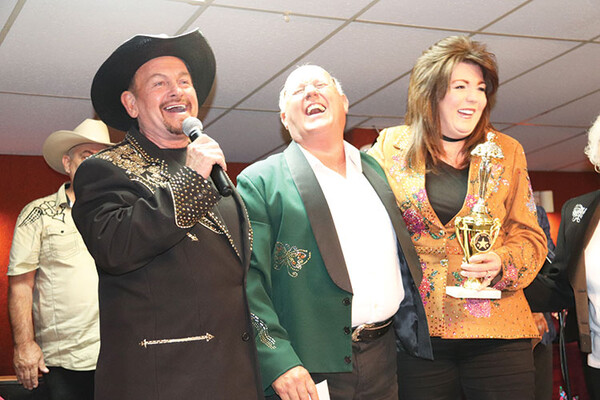 Sue Dodd said of Robert and Billie, they were good teachers and with their guidance everything always seemed to just fall into place like clockwork. They will be leaving a legacy from which we can all profit and learn.

“They are the epitome of integrity and fairness, which was very much in line with the way I always tried to operate my business. That’s just who they are – “good people.” Robert is a true leader, and Billie is the one who would flawlessly take care of all the behind-the-scenes details to make sure everything worked as planned,” said Jim.

Linda Miller, who served with them for several years, said they were always good to bounce ideas off of. Their job was a full year job because they were always passing the word about the Valley even while they were home in Tennessee or traveling to events.

“They are two of my favorite people. There aren’t a lot of words I can use to describe them,” said Miller. They always gave their very best wherever they worked, whatever project was set before them. “Couldn’t have been better friends to everybody, and especially me. I love them dearly.”

For us, current owners of the Winter Texan Times, we know we have a lot to live up to taking over the Valley Star Awards. We hope we can continue their legacy and put on a great show year after year. They are going to be some tough steps to follow, but they were great examples and have provided us with lessons we won’t forget.

Jim shared some words that we can all relate to,

“Happy trails, Robert and Billie, until we meet again. We are surely going to miss you. I am proud to call you my good friends.

“Congratulations on the Heritage Award, an award you certainly deserve. You have created a wonderful heritage for us to reflect upon and for others to build upon. You have raised the bar for all those who follow. God bless you in this next chapter of life.”

We say it again…We love you and thank you! Know that you will be missed!