Movies at the Lighthouse 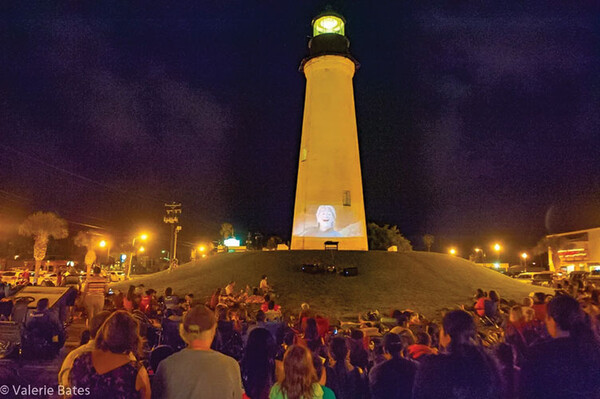 The Port Isabel is bringing back a tradition that was started in 2004 – Movies at the Lighthouse. Movies will be projected on the side of the historical Port Isabel Lighthouse. No admission fee, Concessions will be available. The lighthouse will be open until 9 p.m. for tours (tours do have an admission). Movies start at 9 p.m.

In 2004, the Lighthouse Establishment Cinema was created to offer families an opportunity to enjoy a unique and memorable experience at the historic Port Isabel Lighthouse. Since then, this event has been offered at no admission charge to the public. Concessions are sponsored by the Museums of Port Isabel.

Tens of thousands of people have enjoyed the Lighthouse Establishment Cinema. Movie choices have ranged from “The Creature from the Black Lagoon” to “Jaws” and a very popular “Grease”, which has been shown twice.

The Port Isabel lighthouse was constructed in 1852 and lit in 1853 at a cost of $15,000. It has served as a navigational beacon, a lookout for both the Union and Confederate troops during the Civil War and has been a tourist attraction since well before the turn of the century. In 1952, on the occasion of its century mark the lighthouse was dedicated as a State Park and for many years was the smallest State Park in Texas. In 1994, the Lighthouse Keepers Cottage was reconstructed from original plans and became home to the Port Isabel Visitor Center and Chamber of Commerce. In 2019, the site transferred to the Texas Historical Commission as a State Historic Site.

Today, the lighthouse square serves as the heart of the Port Isabel experience. School groups from all over south Texas visit the lighthouse and continue the traditional roll down the hill. Over 50,000 visitors a year enjoy the grounds and many make the trek to the top for a 16-mile view over the Laguna Madre Bay.