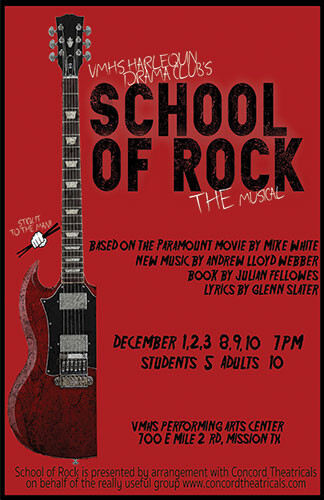 The Veterans Memorial High School (VMHS) Harlequin Drama Club presents “School of Rock-The Musical,” December 1-3, and 8-10 at the VMHS Performing Arts Center, 700 E. Two Mile Rd., Mission. The performances begin at 7 p.m. each day. Tickets will be sold each performance day at the door, starting at 6:30 p.m. General public tickets will be $10.

Based on the 2003 hit film, School of Rock follows Dewey Finn, a failed wannabe rock star who is down on his luck. He decides to make some cash by posing as his friend teaching at a prestigious prep school. Realizing the talent among the students, Dewey decides to mold them into a rock band and enter an upcoming Battle of the Bands competition. Along the way, Dewey finds self-worth, a proper job, and, most importantly, he teaches the children and their parents the beauty of rock and roll.

School of Rock-The Musical is based on the Paramount movie by Mike White with new music by Andrew Lloyd Webber. The book is by Julian Fellowes. Lyrics by Glenn Slater.